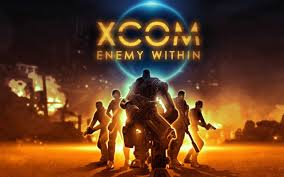 * INSTANT DELIVERY IMMEDIATELY AFTER YOUR PAYMENT IS CONFIRMED *

After payment of the order, the system will automatically (without our participation) instantly send you a link to your email to access the official activation key of the game - XCOM: Enemy Within

XCOM®: Enemy Within is an add-on for XCOM: Enemy Unknown, a strategy that received the title of Game of the Year in 2012. Enemy Within has a huge range of new skills, improvements and weapons to deal with an alien threat. Also added a lot of new maps and missions, new elements of the tactical and strategic gameplay and new content for multiplayer games that give a lot of new sensations. Key Features New skills of soldiers: build a genetics laboratory to improve the physical capabilities of operatives, including amplifications for the chest, brain, eyes, skin and legs. Or build a cybernetics laboratory to make it possible to create a new Mechanized Exoskeleton Costume, aka IEC. The new class - the IEC fighter - is endowed with special skills, and each costume can be supplemented with new types of weapons, such as a flamethrower and a grenade launcher. New weapons and equipment: provide your operatives with an additional tactical advantage thanks to the advanced projects of your team of engineers and the foundry. New enemies: use different tactics to counter two new types of enemies and a deadly organization called EXALT. New strategic resource: the most valuable new alien is opened a resource known as “composition”. Get it on the battlefield and skillfully use it at the base to open up new research and improvements. New tactical challenges and maps: espionage and reconnaissance operations give you new tactical challenges on 40 different maps. New maps, skills and combat units: create your own random squad with a huge number of opportunities and surpass the enemy in intense turn-based battles one on one.

How to activate the key:
- If the Steam client is not installed, download and install it
- Log in to your Steam account or register a new one if you do not already have one.
- Select "Activate via Steam ..." in the "Games" section or click "Add game" in the
in the lower left corner of the application and select "Activate via Steam ...".
- Enter activation key. After that, the game will be displayed in the "Library" section, and you can download it