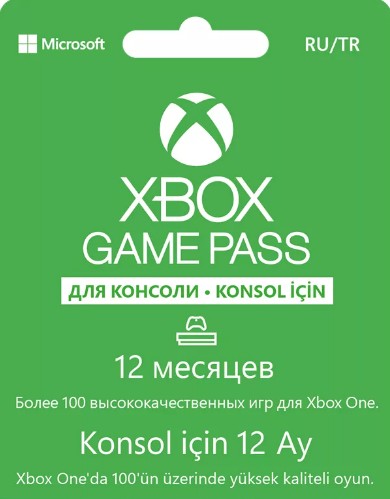 ATTENTION! The codes work both on old accounts that already have an Xbox Game Pass subscription activated, and on new accounts.

THE code FOR activating SUBSCRIPTION the Xbox Game Pass for 12 months is DISPLAYED IN the BROWSER WINDOW and is SENT to YOUR E-MAIL AUTOMATICALLY IMMEDIATELY after PAYMENT!!

This key is distributed by digital distribution. And does not have boxes and disks.

Xbox Game Pass - a kind of subscription to the library of games, which can be accessed for a fee. At the moment, you can play more than 100 games. It is worth noting the great variety, presented as new items and games released during the reign of the Xbox 360, and taking into account the backward compatibility, you can play them on modern consoles.

This subscription is perfect for those who are just starting to get acquainted with the universe of the gaming industry or for those who played only on weak PCs and do not really imagine what the console can offer. Having access to a huge number of games, you can try, choose and experiment.
- Those who just love games, given a great opportunity to try out the maximum number of them.
- If you like any games, and you do not want to renew the game pass, you can buy them with a 20% discount.
- Subscription gives you access to exclusive Xbox games on the day they are released.
- Buying a subscription, it is worth considering that access to the multiplayer will remain closed, to activate it you need Live Gold.
- The list is updated regularly, so it adds and removes games.

To activate via Xbox One:
- Make sure you´re signed in to the Microsoft account for which you want to redeem the code.
- On the home page, scroll left and select the Store icon.
- In the center of the Xbox Store screen, select Redeem code.
- Enter your 25-digit prepaid code and select Confirm.