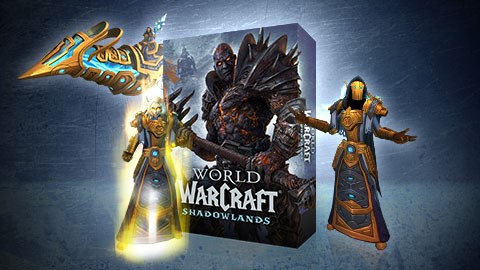 aGameR information about the seller and his items
offlineAsk a question

After Payment You will recieve wow shadowlands heroic us game key!

What lies beyond the world you know? The Shadowlands, resting place for every mortal soul—virtuous or vile—that has ever lived. Pre-purchase the next World of Warcraft expansion now and be ready to discover what awaits in this world between worlds.

The Shadowlands are home to an entire universe of the departed. Journey through hidden realms of wonders and horrors that await any who pass to the other side.

Align yourself with one of the Shadowlands’ four Covenants—otherworldly shepherds of the dead, each with their own ambitions, motives, and incredible powers to claim as your own.

Test your limits as you ascend Torghast, Tower of the Damned, a highly replayable ever-changing dungeon in the dark heart of the Maw, where the vilest souls are locked away forever.

Includes a pre-purchase* of World of Warcraft®: Shadowlands, the Wandering Ancient mount (available in 2021), and early access to Death Knights for Allied Races and pandaren. Players who own the Base Edition may also begin the quest for the Vestments of the Eternal Traveler by seeking out another player who owns the Heroic or Epic Edition.
Heroic Edition

Includes everything in the Base Edition, plus instant access to a Shadowlands-Level Character Boost and the Ensorcelled Everwyrm flying mount. The flying mount grants a quest for the Vestments of the Eternal Traveler transmog set.

Keyboard and mouse required. Other input devices are not supported.
Resolution