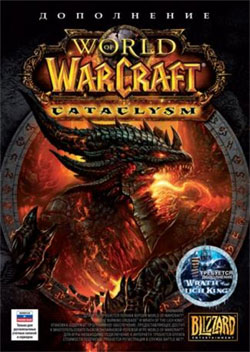 You pay for the scanned image of the license activation key (CD KEY) game World Of Warcraft: Cataclysm for RUSSIAN accounts from the official partner of "1C-SoftKlab."

Dear customer, in order to avoid lock key and your accounts are purchased KEYS bought from an official supplier.
BEWARE OF CHEAP suspicious code as They can be purchased not by legal means (FOR stolen credit cards) AND CAUSE bananas.

Please note that the company is an official partner PLAYO 1C and we give full warranty for our keys.

BONUS ATTENTION! Leave your positive feedback after payment and will receive a cash gift certificate that you can pay for further purchases from us!

For a successful activation you will need to have an account World of Warcraft with activated two previous additions:
Burning Crusade and Wrath of the Lich King.

About the game:
The virtual world of World of Warcraft has long been a Mecca for fans of action-packed, dynamic and non-linear games. Today, fans of the cult game anticipate output WoW Cataclysm - the third add-famous game. Soon you can buy World of Warcraft: Cataclysm and try on the role of the valiant hero who must save Azeroth from attack Deathwing.

Here you can buy WoW Cataclysm and go to the salvation of Azeroth. After all, the ancient dragon, who was once defeated, and intends to get back to the ground three continents to deliver a crushing blow. You can buy WoW Cataclysm to try and fulfill the main mission - to prevent the jaws of a barrier between the two worlds and defend Azeroth.
In the near future it will be possible to buy a license activation key (CD KEY) to complement the World of Warcraft: Cataclysm (WoW Cataclysm) and make sure that the expansion appeared not only a lot of aesthetic and visual changes, but was upgraded mechanics of the game itself.

In the depths of the Underdark, inhabited earth elementals, asleep monstrous evil forces.
The last battle with the army of Azeroth Dragon Aspect Deathwing struck, the seduction of evil forces, serious injury. Sheltered in the hideout, he for many years to heal the wounds, waiting for hours when he could return to the surface in a hot flame and reforge the world in their own way.

Soon, Deathwing the Destroyer will appear again on Azeroth, having risen in the fire and the roar of the underground mineral resources. His appearance brutally mutilated planet. Horde and Alliance will be in the heart of the universal cataclysm. The world of Azeroth will begin to crumble before the eyes of the inhabitants, war breaks out the elements. But suddenly out of nowhere will exhibit new heroes. They are destined to save the world from the crippled complete devastation.

After the purchase of grain, we pay your time and leave your positive feedback, you will receive a small gift certificate with which will be able in the future to pay for purchases on this trading platform. Believe me it is very important for our future work.

We are always happy to help you and ready to answer your questions.
Sincerely, Playo.

AION - RUS - any server / side ANY AMOUNT