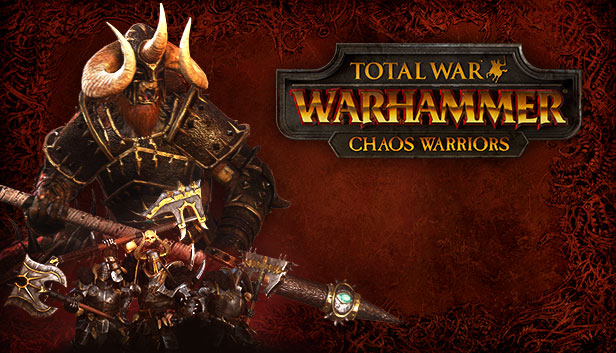 After payment of the order, the system automatically (without us) instantly send you a link to the post office to access the key, the official activation of additional content for the game Total War: Warhammer - DLC "Chaos Warriors Race Pack" (A set of races, "Warriors of Chaos")

A set of races, "Warriors of Chaos" adds to the Total War ™: WARHAMMER® new race with its own legendary masters, troops, mounts, items, quests and game mechanics.

Three new legendary ruler.
New mounts, warriors and monsters of chaos.
New assignments, magical items and abilities.
The new style of play, "horde".
Lead terrible warriors of Chaos and cast the ashes of the old world. This package includes a full set of bloodthirsty warriors, mounts terrifying and monstrous creatures. Head evil hordes of Chaos, try on the role of one of three new legendary masters. Open your arms of destructive forces and go to a new job chain to find powerful items and gain glory in the name of the gods of Chaos.

For Kislev, a strange trolls, and even barren peninsula Norsk lies shrouded in mist land which fettered unnatural, endless winter. There are touching the world of mortals and intangible ownership of Chaos, forming uncontrollable gate to the hellish dimension, where constantly crawling creatures of nightmare species.

Few mortals be put at risk in these places, but returns less. Savages, living south of the gates to worship the gods of Chaos, and often go to the north to try to become a conductor of the will of their masters. Those who have kept this unholy pilgrimage and survive irreversibly transformed. These mighty Chaos warriors clad in black armor, decorated with dreadful marks of favor Destructive forces are ready to fulfill any order without question their cruel masters, such as their leader - the indomitable Arhaon Chosen Forever.

This package makes the whole race of warriors of Chaos from the basic version available for management in the great campaign and multiplayer game; In addition, it adds an entirely new legendary rulers, rulers, heroes, warriors, magic items, and more.

Activation:
1. Launch the Steam client.
2. Go to the "Games" section and select "Activate in the Steam".
3. Enter your purchased activation key.
4. After that, the game will appear in your list of games and it can be set.