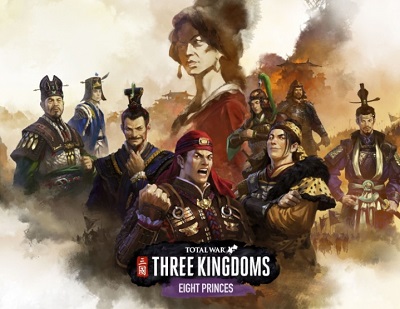 Sold: 0
Uploaded: 08.09.2020
Content: Total War THREE KINGDOMS Eight Princes Chapter Pack.txt 0,24 kB
Loyalty discount! If the total amount of your purchases from the seller GameCod more than:
If you want to know your discount rate, please provide your email:


Each buyer who leaves a positive review (I want a gift) gets one of more than 40 different games for Steam. Which one? You will find out about this when you receive your GIFT.
It can be activated on "Steam".

Gift distribution is done within 48 hours after writing a comment.
Attention!! By submitting a review, you guarantee that you have read all the conditions for the Gift and if something is not clear, you have asked.

It is 291 A.D. e. There are no more living witnesses of the Three Kingdoms. The country, divided between the three lords, was brought together by the Jin dynasty - but now the Celestial Empire is on the verge of a new civil strife.

The source of the discord is the contradictions between the princes of the imperial house. They have different aspirations and means to which they are ready to resort, but they all have the same goal - power. Eight princes rose above all others ... Will they come to the aid of their emperor and his empress, or will they create their own legend that will be remembered centuries later?

The War of the Eight Princes chapter set is set one hundred years after the events of Total War: THREE KINGDOMS. Play as new factions under the leadership of the most influential princes of the Jin Dynasty. Each of them has special game mechanics, and each time you change the leader, you will be forced to build a new strategy.

SUPPLEMENT FEATURES:
- A campaign that unfolds a century after the era of the Three Kingdoms.
- Eight princes leading the factions available to players; each of the factions will require a special approach.
- New buildings, assignments and palace intrigues.
- New elite troops - heavy cavalry, capable of crushing the enemy formation.
- New inclinations system. The pursuit of wealth, goodness, wisdom, or power will determine in which direction your faction will develop.
- Changes in the mechanics of the development of factions and public order. These mechanics have been redesigned to fully reflect the spirit of the unique historical confrontation.