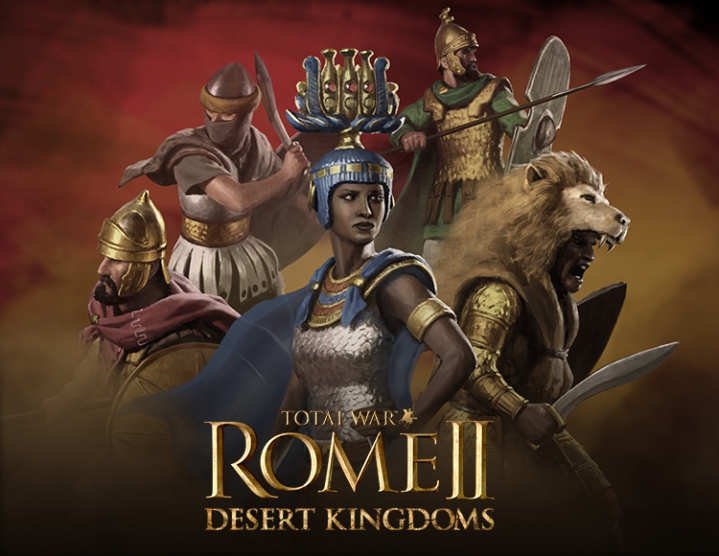 Description:
Attention! To run requires the presence of the game Total War: Rome II.Total War: ROME II - a set of cultures of the desert state The set of cultures of the desert state adds to Total War: ROME II four new factions for which you can play. The kingdoms of Kush, Saba and Nabataea represent Afrikan-Arabian culture, while the tribe of the masses have Numidian roots. Representatives of these factions live in the deserts of Africa and Arabia. Harsh natural conditions have tempered them: the soldiers of these peoples are enduring, and unsteady sands help them to win battles. Despite the similarities of cultures, each of these factions has a unique set of military detachments, as well as new construction chains and a technology tree that determine its advantages and inimitable style of the game. In addition to individual features, desert states have common cultural features. Desert wars: bonus to fighting spirit during desert fights and additional income from agriculture. itsii: penalty to speed issledovaniyaMeroe (Kingdom of Kush) Kush - a major regional power, made huge profits from the trade in gold, precious stones and skins of exotic animals. This kingdom was forever in the shadow of its more powerful and famous northern neighbor - Egypt. At the beginning of the III century BC. e. King Ergamen decided to deprive the power of the priests of Amun and transferred the capital from Napa to Meroe so that the priests could no longer manage the destinies of the kings and queens of Kush. This transfer also marked a kind of break with the Egyptian culture: trading with other countries, Kush borrowed the elements of the Greek, Indian, Persian and African culture. Kush and warrior queen Kusha so zealously protected the wealth of Nubia that even the Romans could not capture Meroe and instead preferred to trade with Kush. Kush is a mighty kingdom with a lot of fertile land and natural resources. He has every opportunity to prosper and again enter into a fight with the world´s greatest powers. Key Features: Proximity to the Egyptian / Greek culture
A higher probability for women to participate in politics
The trading power (ivory, skins of exotic animals, iron, gold)
Advanced pottery craft
Features of the faction: Disciplined workers: additional income from slaves, slower reduction in the number of slaves, a reduced fine to the public order for slavery.
The country of bows: cheaper and more powerful archers.
Nabatea Nabataeans were skilful builders and applied innovative construction methods. They were the first to widely use cement and to construct surprisingly sealed reservoirs for drinking water. Despite the fact that the Nabataeans were threatened by such influential enemies as the Seleucids and Jews, the progressive structure of society allowed the state to flourish. Compared with the ancient civilizations of that time, their society was distinguished by a high level of education and surprising equality. Women had the right to participate in political and religious life. Nabataeus was an important center for the trade in spices, as well as a mediator between the southern kingdoms that produced incense and myrrh and rich empires of the east and west - the main buyers of these goods. The trained army and a strong fleet helped protect the wealth and strategic position of the Nabataeans. In addition, excellent engineering facilities and competent use of the terrain turned Petra, the capital of the country, into an impregnable fortress. Key Features: Greek influence: you can hire Greek-style fighting units
Silk Roaders: a bonus to trade and diplomacy
Skillful masons: a bonus to construction and fortifications
Friends of Rom