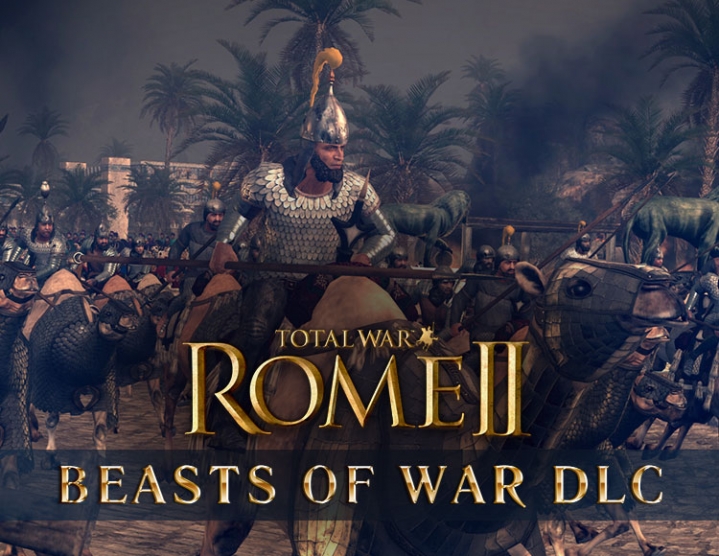 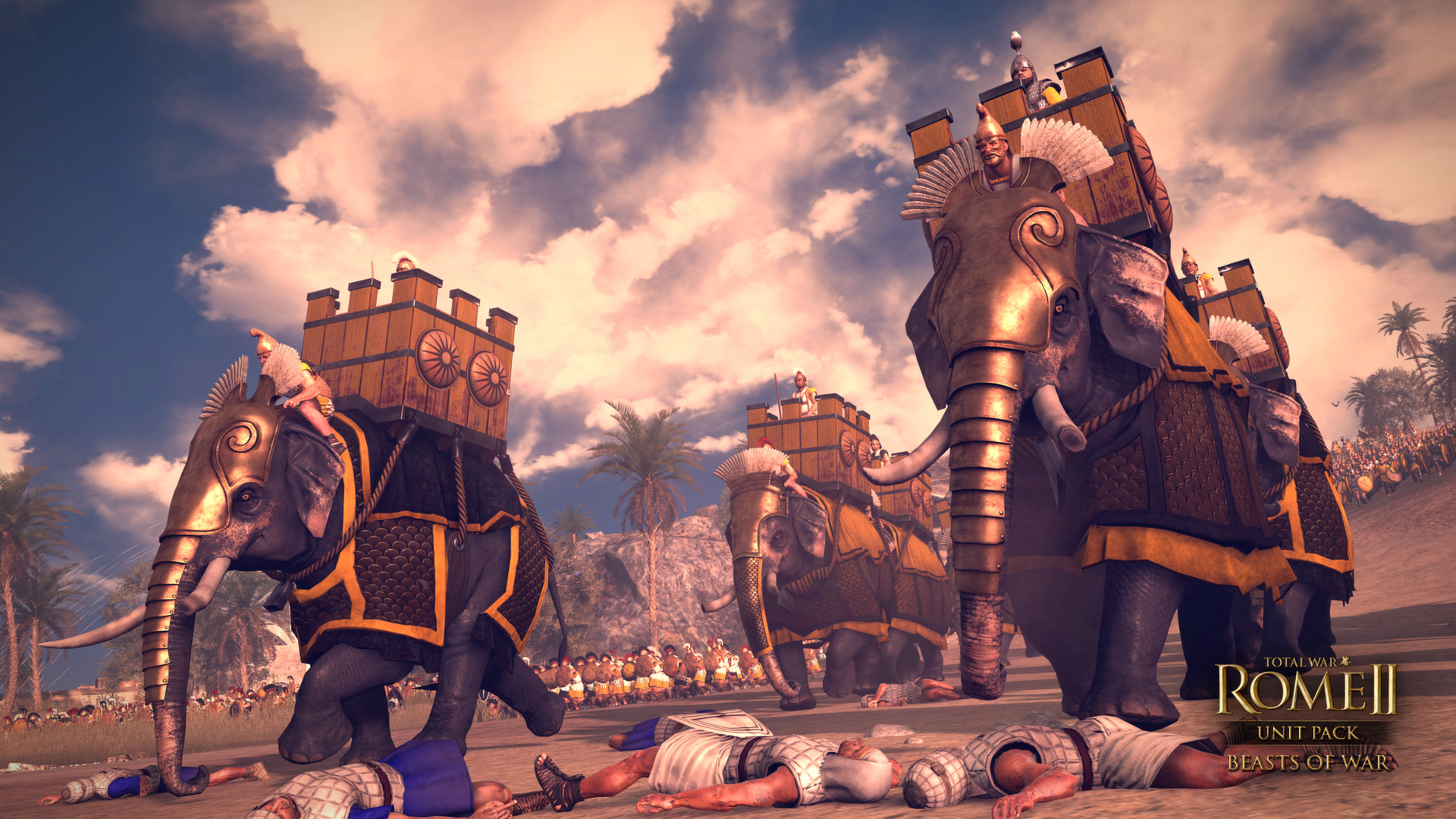 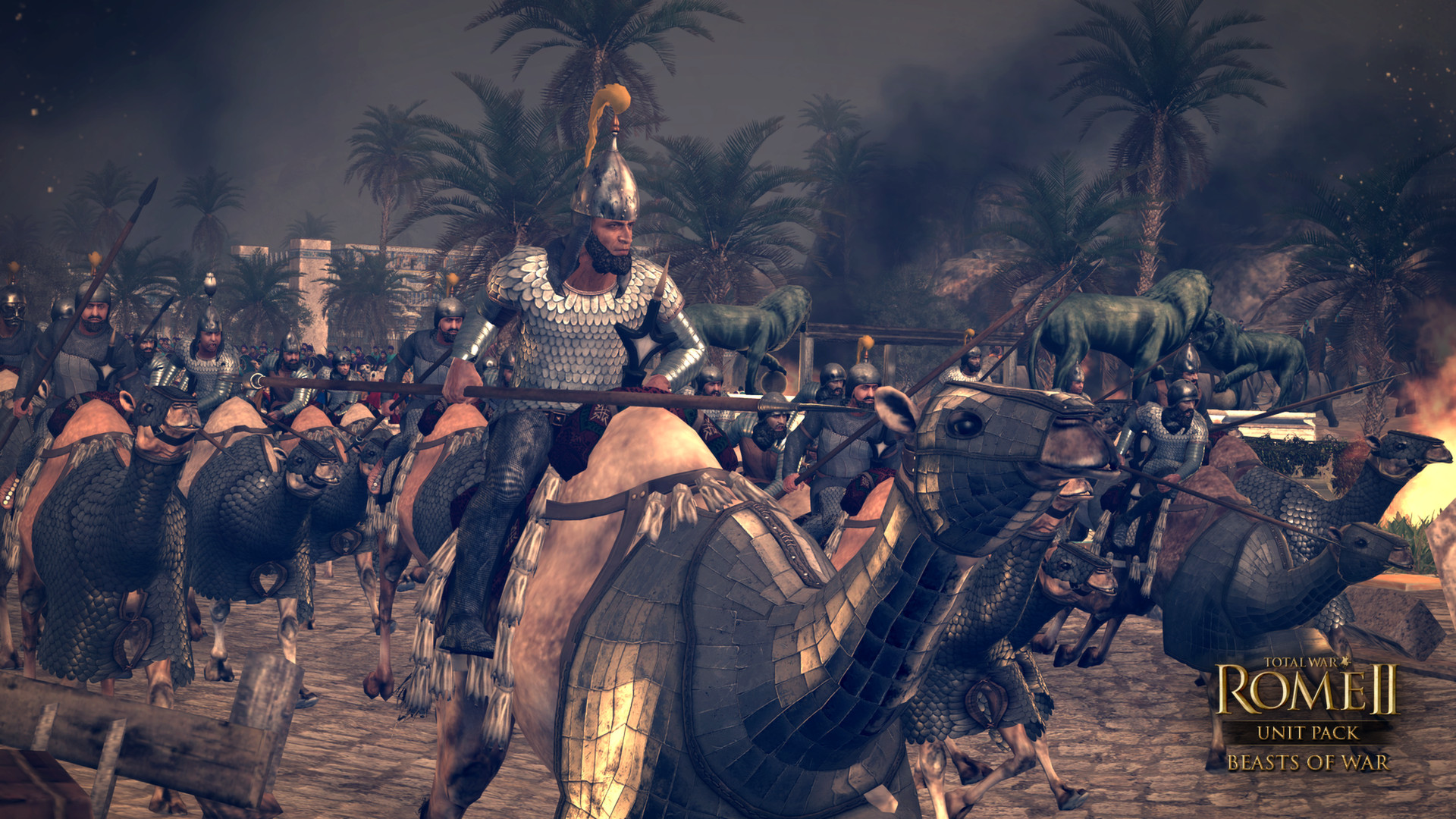 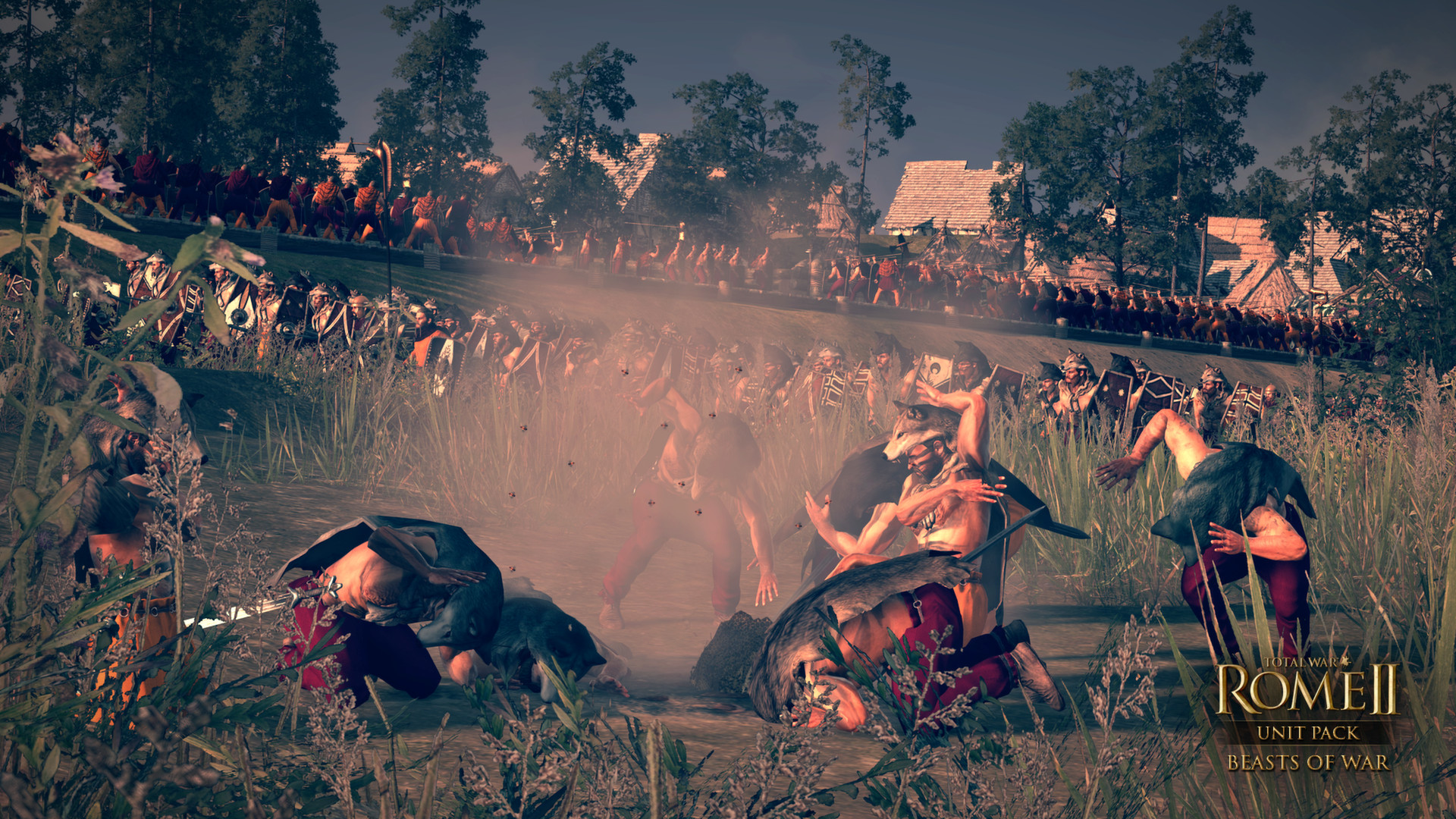 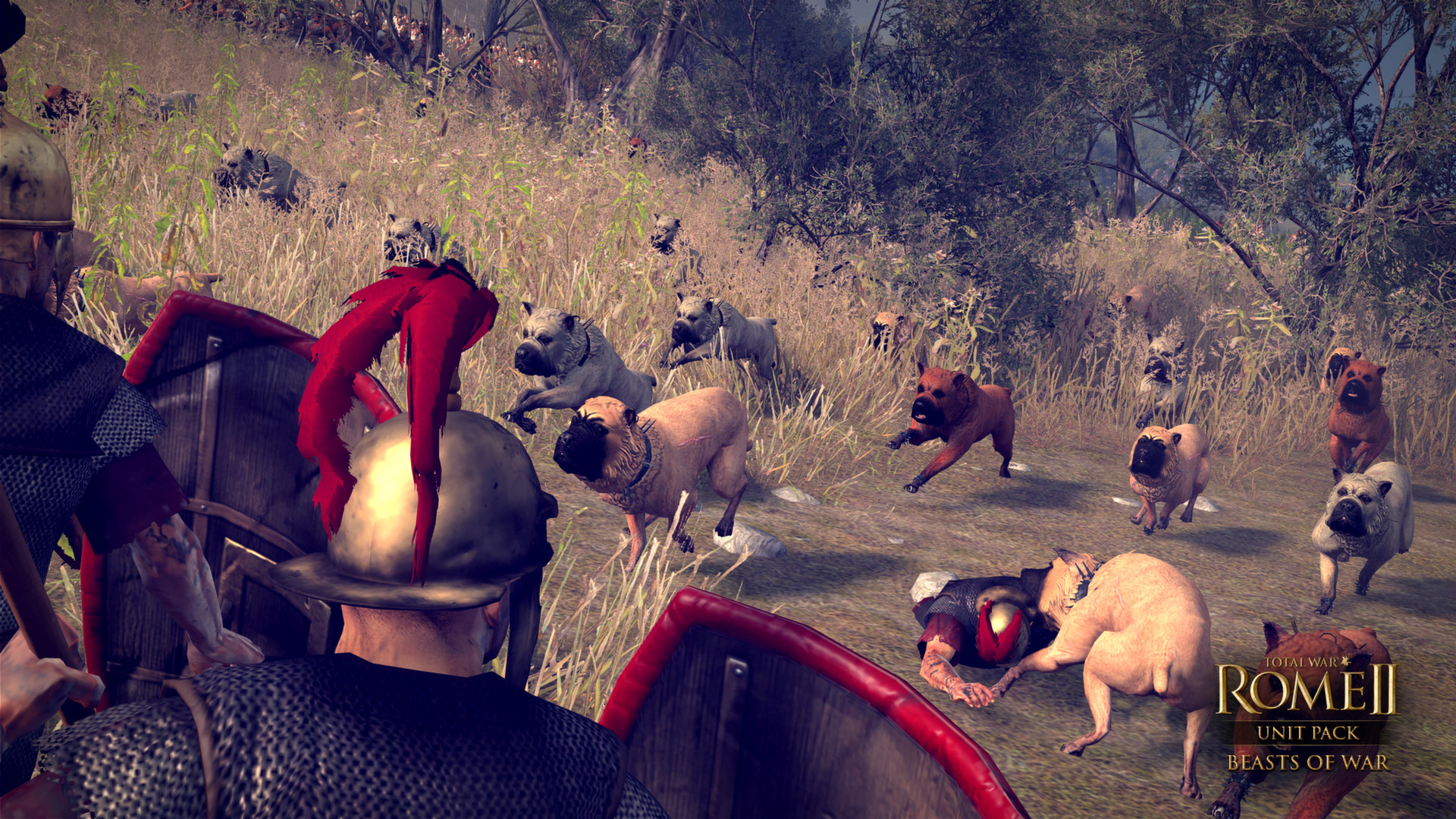 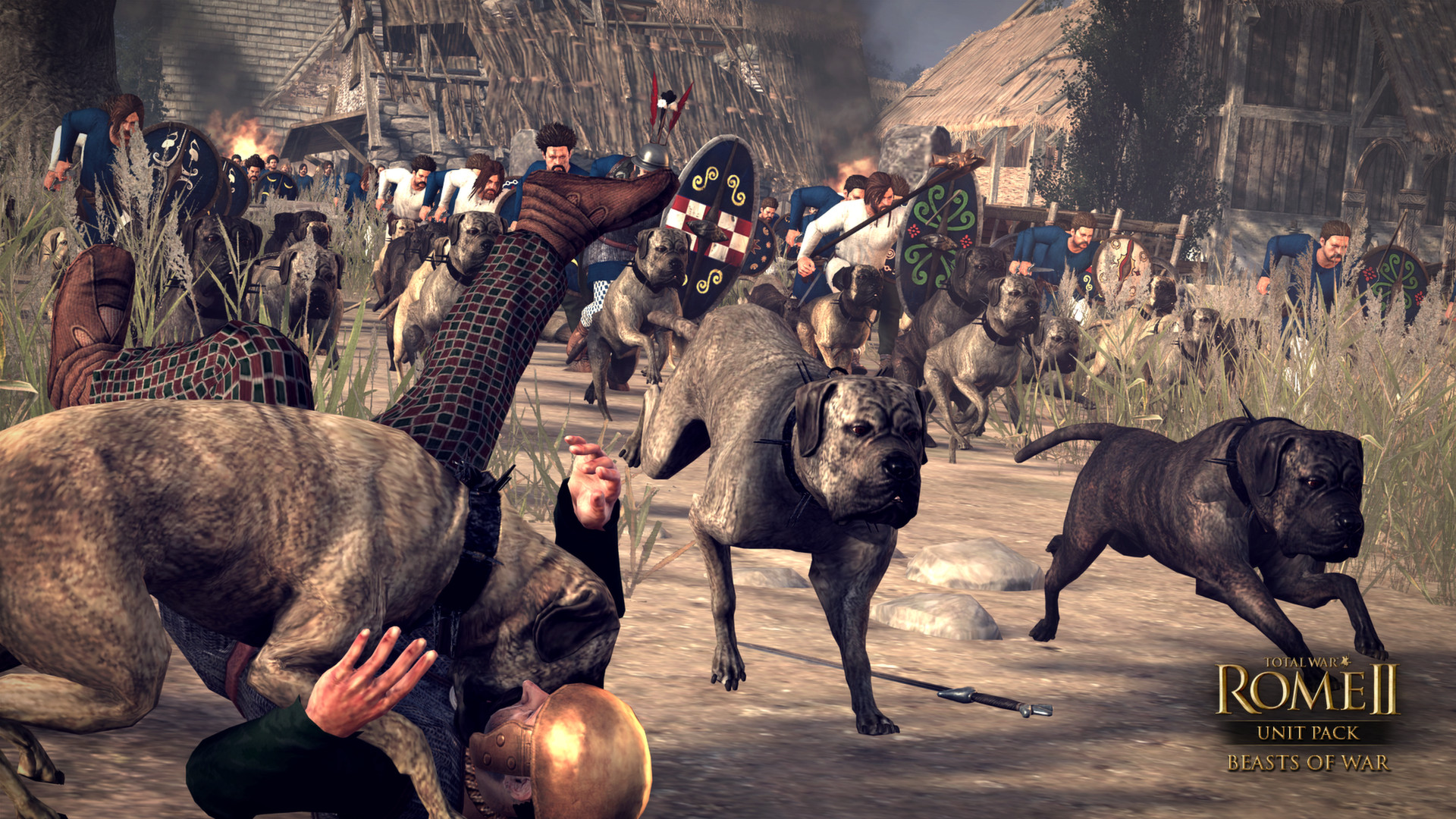 Description:
Attention! To access the content of the add-on, you need to play Total War ™: ROME II - Emperor Edition. Total War: ROME II - Combat animals. Provide your savage nature and instill primal fear in the hearts of enemies with recruiting troops. Fighting animals for ROME II. The Combat Animal Kit contains seven new types of troops and further enhances the extensive selection of fighters in ROME II.
Instruct chilling horror on enemies, throwing them with bee hives and pots with scorpions and snakes or trample under the feet of armored cataphracts on camels and Syrian mercenaries on armored elephants. And when their will is broken and they run from the battlefield, seed them with two new breeds of ferocious war dogs.
The Combat Animals set adds the following types of troops to the ROME II game, which you can hire: • Molossian dogs
Available for hire: Epirus
Molossian dogs, now extinct massive and muscular beasts from western Greece, are considered the progenitors of many of today´s large breeds, such as the Rottweiler and the Danish Great Dane. They were used both as watchdogs and as combat dogs. Virgil wrote: "When they are on guard, do not be afraid of either the night thief, the wolf pack, or the Iberian bandits behind their backs." These ferocious dogs are distinguished by their indefatigability and never lose track of the enemy. • Onager-Bee-litter
Available for hire: Rome, Athens, Epirus, Macedonia, Sparta and Syracuse
Full-scale beekeeping for agricultural purposes was a later phenomenon, but, nevertheless, a modest beehive was an important place in the culture of Ancient Greece. Fries or "bee-maidens," three nymphs, were the favorites of Apollo and Poseidon and gave birth to their children. The bees were also used in battles: a swarm of furious insects introduced confusion and panic into the ranks of the enemies • Ballista scorpionet
Available for hire: Pont, Parthia
In Asia Minor there are the most poisonous scorpions of the world, whose bite can paralyze and kill a person in just an hour. Naturally, the use of scorpions in military affairs was only a matter of time. You can only sympathize with the Roman emperor of the North, the army of which fell from the walls of the besieged Parthian city of Hatra, pots filled with scorpions. Like Trajan before him, the North could not take the city even with two attempts. • Ballista-snake
Available for hire: Carthage
Perhaps the most famous application of animals in pots was the battle of Hannibal Barqi with the fleet of the Pergamon king Eumenes II. Shielding the ships of Eumenes with large earthen pots full of poisonous snakes, he caused panic among the ship-owners and enemy fighters and won. Anyone with a writhing venomous snake grabbing will think hard about whether it is worth moving on! • Cataphracts on camels
Available for hire: Parthia
The Roman General Macrin did not have much experience. However, if in the Battle of Nisibis in 217 AD, e. any other commander fought, he would hardly have been less amazed to see Parthian horsemen on camels rushing to battle. They were dressed in strong, but flexible scaly armor and represented an amazing and frightening sight. The riders broke through the ranks of the Romans, and the sharp stench of their camels frightened the Roman horses • Celtic war dogs
Available for hire: Etseny, Cantii, Caledonians, Demete, Dumnona, Brigante and Ebdany
Since ancient times, dogs have been used in the troops for protection, patrols and reconnaissance. With proper training, they can prove themselves on the battlefield. The fighting breeds were carefully selected, and the dogs were taught not to pay attention to the noise and turm