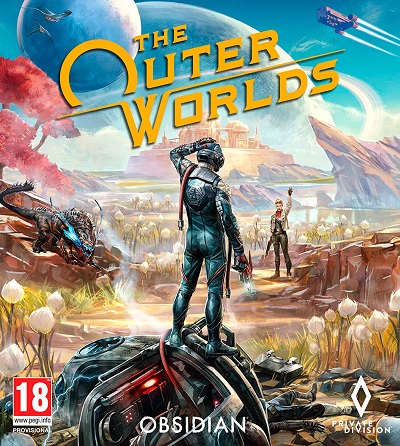 Uploaded: 11.01.2020
Content: The Outer Worlds_5.txt 0,24 kB
Loyalty discount! If the total amount of your purchases from the seller GameCod more than:
If you want to know your discount rate, please provide your email:

GAME FEATURES:
- A role-playing game where the player determines the development of the plot: Obsidian is true to its traditions, so the events in The Outer Worlds are up to you. Your decisions affect not only the plot, but also the character development, the fate of the satellites and the final game.
- The good news is that you are not perfect: The Outer Worlds has a unique flaw system. They form the character of any bright hero.
- The game analyzes your actions and determines what you do worst. Are you constantly attacked by raptidones? Choose the lack of "raptiphobia", and you will become weaker in front of these terrible creatures, but you will receive additional ability for this. Thanks to this choice, you can create a unique character while traveling around Alcyone.
- Manage satellites: exploring a distant colony, you will meet many characters who are ready to join your team. They have unique abilities, tasks, motives and ideals. You can help each satellite to achieve their cherished goal, or use it for your own benefit.
- Explore the corporate colony: Alcyone is a colony on the edge of the galaxy that is owned and managed by the corporate board of directors. Everything is in his power ... except for the alien monsters that appeared after an unsuccessful attempt to terraform the two planets of the colony. Get the ship, assemble a team and go explore the settlements, space stations and other corners of Alcyone, full of mysteries.

1. Download and install If you do not have the Epic Games launcher installed, download and install it https://launcher-public-service-prod06.ol.epicgames.com/launcher/api/installer/download/EpicGamesLauncherInstaller.msi
2. In the launcher, select “Activate code” in the drop-down menu, or activate the code on the official website. (https://accounts.epicgames.com)
3. Download and after full installation, start and play.

NOTE: After activating the serial key in EPIC Games, the key becomes invalid, i.e. can not reuse it.
MUST remember, and better write down all the details of your account! Without them, you will not be able to access activated games in the future.

Dear customers!
We will be very grateful to the positive feedback!
Thank you very much, your GameCode.

All our products on the page http://gamecod.plati.market