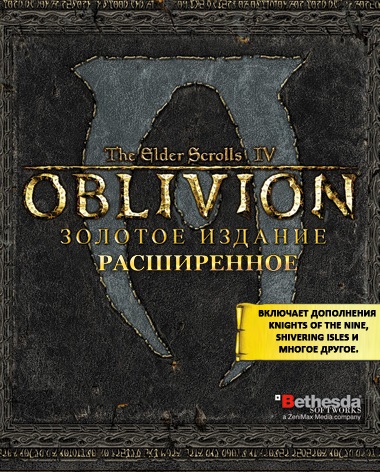 Uploaded: 02.07.2021
Content: The_Elder_Scrolls_IV_Oblivion_GOTY_177.txt 0,24 kB
Loyalty discount! If the total amount of your purchases from the seller GameCod more than:
If you want to know your discount rate, please provide your email:

<Attention> EDITION COMPOSITION:
- The original game The Elder Scrolls IV: Oblivion
- Addition Shivering Isles - you will get to Shigorat, which is divided into Mania and Dementia. Which way to go, you decide.
- Supplement Knights of the Nine - Knight Order of the Nine were dissolved long ago. You are entrusted with a mission to revive him and return him to his former glory.
- Supplement Fighter´s Stronghold - a huge castle will allow a noble war to lead a decent lifestyle, providing him with everything you need: private chambers, a magnificent dining room, wine cellar, barracks, training hall and much more.
- Addition Spell Tome - books with new spells.
- Addition Vile Lair - underwater shelter for assassins and vampires, where there is a bed in the form of a coffin, a place to store items, and you will also be able to control the servants of darkness.
- Addition Mehrune´s Razor - go through the most dangerous and mysterious caves of Cyrodiil in search of ancient weapons.
- Addition of The Thieves Den - reveal the secret of the famous pirate ship and become its captain.
- Addition Wizard´s Tower - visit the mysterious Ice Spire in the mountains of Cyrodiil. In the tower, mage players can find a lot of useful things for themselves.
- Addition Orrery - subjugate the power of the stars. Restore the planetarium and uncover the secrets of the guild of magicians.
- Addition Horse Armor - protect your horse from danger with this beautiful armor set. </ Attention>

Game The Elder Scrolls IV: Oblivion takes us to the dark times of the province of Cyrodiil, the state of Tamriel. The emperor died at the hands of unknown assassins, in the province of chaos and anarchy. Few of this, using anarchy, the villages of Cyrodiil are attacked by demons that broke through the gates of Oblivion, carrying death and destruction to all living things. Our challenge is to return peace and tranquility to the once flourishing land of Tamriel. How to do it There is only one way - to return the throne to its rightful heir.

GAME FEATURES:
- In the game we are not limited in time and ways to achieve the goal, as in the best traditions of the genre. The Elder Scrolls did not make an exception and this time, giving the hero the opportunity to become a member of any of the factions acting in the game. Each faction has in its arsenal many quests for the hero, having passed which, he can ascend to the top of the hierarchy.
- The game implemented artificial intelligence (AI), which allows characters to act on their own.