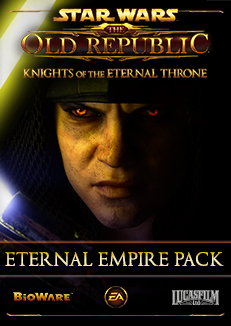 STAR WARS ™: THE OLD REPUBLIC ™ FULL Version + Knights of the Fallen Empire + Rise of the Hutt Cartel + Shadow of Revan

The official key of Star Wars: The Old Republic game, which gives you the right to create an account for playing on EURO or USA servers and receive 60 days, with no restrictions on the Free to Play subscription version, and will also provide you with 1050 Cartel Coins (coins) in game.

• Access swoop based on KOTOR - Kakkran Daggerstar and 3 previous additions.
• Kakkran Daggerstar (a speeder created in honor of and based on the game with which it all began - Star Wars: Knights of the Old Republic.)
• The Knights of the Fallen Empire Campaign - Become an Outlander and head to the outer ring of the galaxy to face the new threat - Emperor Valcorion and his empire - face to face.
• The campaign Rise of the Hutt Cartel - a new powerful enemy - Hutt Cartel, which threatens the existence of an entire universe.
• The campaign of the Shadow of Revan - At the height of the war between the Sith Empire and the Galactic Republic, an extremist sect appears, headed by the former hero of the Jedi Civil War, Revan.

• Freedom of choice and flexibility: you can play for free, passing the story campaign to level 50 with little restrictions. Or you can immediately purchase a subscription to unlimited access to the game, the cost of which includes a reward program - with it you will receive an in-game currency (coin cartel), on which you can buy valuable items on the market of the cartel.
• Define your destiny in the world of Star Wars: you are given one of eight classic roles, make a choice and become the hero of your own saga - an interactive story campaign with cinematic dialogues and full scoring of all the characters of the game.
• Feel the scale of the battles: fight in lightsaber dueling, arrange disassembly in bars or take part in full-scale hostilities.
• Choose a light or dark side: Many of the actions you do in the game will eventually show which side of the Force (the Force ™) you belong to.
• Become a pilot of your own ship: get your own ship at your disposal, which will become your base of operations; explore the universe on it and participate in space battles.
• You are not alone: ​​build or destroy relationships with companions who can join you on travel and fight on your side.
• Discover the world of a full-blown multiplayer game: make duels with your friends, participate with them in battles, full-scale military operations and much, much more!

Immediately after payment, you instantly receive a unique digital activation code for Star Wars: The Old Republic: FULL Version from the license box with the game. The product you bought will be immediately sent to your e-mail.

The third lesson of 5 lessons on system OrCAD