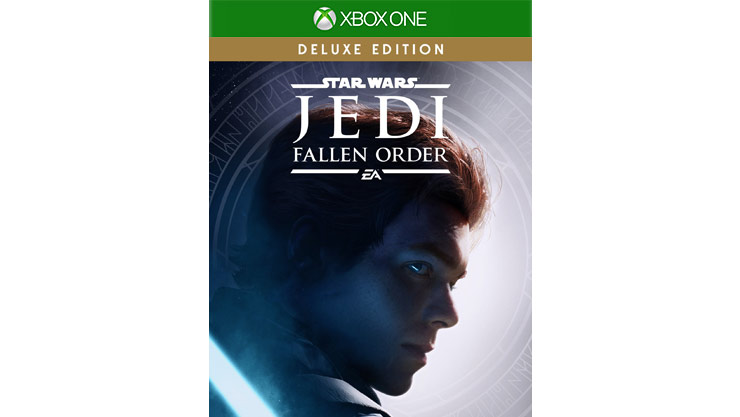 persme information about the seller and his items
offlineAsk a question

You get a license key to download Star Wars Jedi: Fallen Order Deluxe Edition for XBOX ONE.

Deluxe Edition
Get access to the materials on which the Jedi STAR WARS: Fallen Order ™ Deluxe Edition game is based, including:
Cosmetic skin for BD-1
Cosmetic skin for the ship Stinger Mantis
Digital Graphic Album
The directorial version of the film about the creation of the game, including more than 90 minutes of filming of the development process

Jedi STAR WARS: The Fallen Order ™, a new third-person action adventure game at Respawn Entertainment, features galactic adventures. In this single-player game, you will be a Jedi Padawan who miraculously escaped the purges of Order 66 that occurred after the events of Star Wars ™: Episode III - Revenge of the Sith ™. In order to restore the Jedi Order, you must collect the fragments of your broken past to complete your training, develop new powerful abilities of the Force and become a master of the legendary lightsaber, while remaining one step ahead of the Empire and its deadly inquisitors.
Improving their abilities, players will engage in intense cinematic lightsaber battles using the Force, just like the movies in the Star Wars universe. The player will need to develop a strategic approach to various opponents, as well as evaluate their strengths and weaknesses and skillfully use the Jedi training to crush the enemies and solve the mysteries lying in his way.
Star Wars fans will recognize iconic places, weapons, equipment and enemies, as well as meet new characters, places, creatures, droids and opponents who have not yet appeared in the Star Wars universe. During this authentic story in the Star Wars universe, fans end up in a galaxy recently captured by the Empire. As a Jedi hero on the run, the player will have to fight for survival, exploring the secrets of a long-extinct civilization and trying to collect the remnants of the Jedi Order, while the Empire is campaigning for their complete destruction.

1. Click the Xbox button to open the guide, and then click Home. Verify that you are logged on to the Microsoft account for which you want to activate the code.
2. On the Home page, scroll to the right and select the Microsoft Store icon.
3. Select Use code.
4. Use the onscreen keyboard to enter the 25-digit code on the Activate Code or Gift Card screen, and then click Next to complete the process. Do not enter hyphens: the system will take care of them automatically.