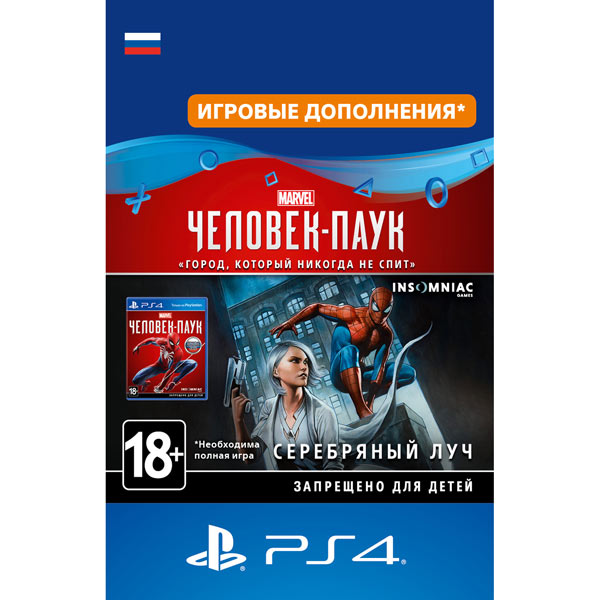 Aleksandr000123 information about the seller and his items
offlineAsk a question

The code will come immediately after the purchase, automatically displayed in the browser window and will come to your email

PlayStation 4 add-on
The territory of activation and use only the Russian Federation.

this is chapter 3 of the supplement

Friendly neighbor has become accustomed to saving New York in his spare time, not hesitating to fight with the powerful villains and a whole gang of their minions. Action Spider-Man, released exclusively on the PlayStation platform, gave gamers a sense of free flight in an open world, as well as an advanced combat system and superbly orchestrated story missions.

CARGO OF RESPONSIBILITY
In Spider-Man, you can follow the path of the hero, meeting characters known from comics and films. Fans of the universe were delighted to see a real blockbuster, transferred to the home console. The phenomenal level of graphics and a new dimension of freedom while traveling through the city on the web, dozens of basic and additional quests that draw players for long hours. And now it´s time to test add-ons released after the release.

RAY OF HOPE
Spider-Man: Silver Lining is concentrated around the Silver Sable - a professional mercenary, which contains a whole staff of experts of not the widest, but extremely deadly profile. She was also drawn into the disassembly of Spider-Man with the Sledgehammer, and she was ready to play her part in the plot. Addition expands the game through new story missions, additional tasks and assignments.

INSTRUCTIONS FOR REPAYMENT
1. Create a Sony Entertainment Network account on the site
ru.playstation.com/registration.
2. Login to PlayStation®Store or our online store.
3. Select the “Redeem Codes” item (on PS Vita, you first need to click on
“Settings” icon at the bottom of the screen).
4. Enter the 12 digits of the promotional code and click Continue.
5. Then follow the instructions on the screen to redeem your promotional code.