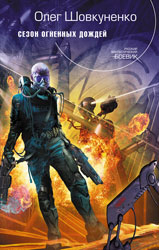 Fighting Fantasy, the third book of the trilogy, "The battle in the darkness"
File 2,7MV formats FB2, PDF, TXT
Winning the battle space was given a terrible price. Rota "thugs" had disappeared in the depths of the sinister black areas. At the cost of their lives, people crushed the evil taivsheesya in the depths of a deadly labyrinth. However, why the terrible fire went out galactic war? How come the hordes of new monsters unseen? Whose ominous shadow looming behind the invaders? To penetrate into the mystery can only real heroes. Those who fought in the gloomy Agave, those who go out alone against hundreds of enemies, those who are dying in stinking dungeons, kept the pride and loyalty to the brotherhood of earthling men. And "thugs" are back! As they were ghosts from the dead again to rush into a bloody battle!

Shovkunenko Oleg and one day THREE