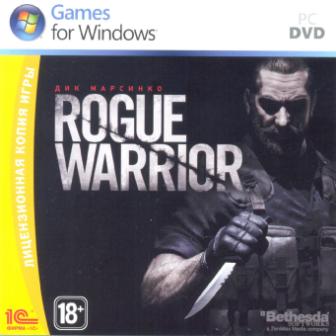 Uploaded: 18.06.2017
Content: text 57 symbols
Loyalty discount! If the total amount of your purchases from the seller GameMarket more than:
If you want to know your discount rate, please provide your email:

Government conspiracies, secret weapons and the stakes higher than life - all this awaits you in the famously twisted political blockbuster Rogue Warrior by Richard Marcinko nicknamed Demo Dick in the lead role. This - not a fictional character, but the real party to the hostilities. Richard went through the crucible of Vietnam, served in the unit "sea lion" and was involved in the present government scandal. On his eventful life he told in the book, and now became the hero of the game.

In Rogue Warrior (this is one of the nicknames Marcinko) to you in the role of Richard to go to the other side of the Iron Curtain, to stop the North Korean program to produce ballistic missiles. But - just the beginning, and in the future fate will throw you in the very bowels of the USSR, where there is technology that can completely change the geopolitical balance of the planet. Your task - to destroy it, but this would be no better than to stay alive!

The main role - Richard Marcinko. The name of the soldier become a part of history, but to give him an unambiguous assessment impossible. His defiant, rude, and sometimes violent actions, he also earned respect and gained notoriety. And now you in the role of the harsh and ruthless fighter must use any means to fulfill its mission.
Necessary Roughness. In a game with these stakes all means are good. There are no holds barred, and there is only one rule - to detect and kill the enemy before they find and kill you. To quickly and effectively cracking down on opponents, in the arsenal of Richard has 25 unique tricks.
Tactical destruction. Anything that can help the enemy must be destroyed. Destroy any objects that the enemy can exploit.
Who is cooler? Find it in a collective battle over the network, where you can try out the deadly tricks on their friends.
The golden voice. Main character announced the winner of the "Golden Globes" and nominee for "Oscar" inimitable Mickey Rourke!