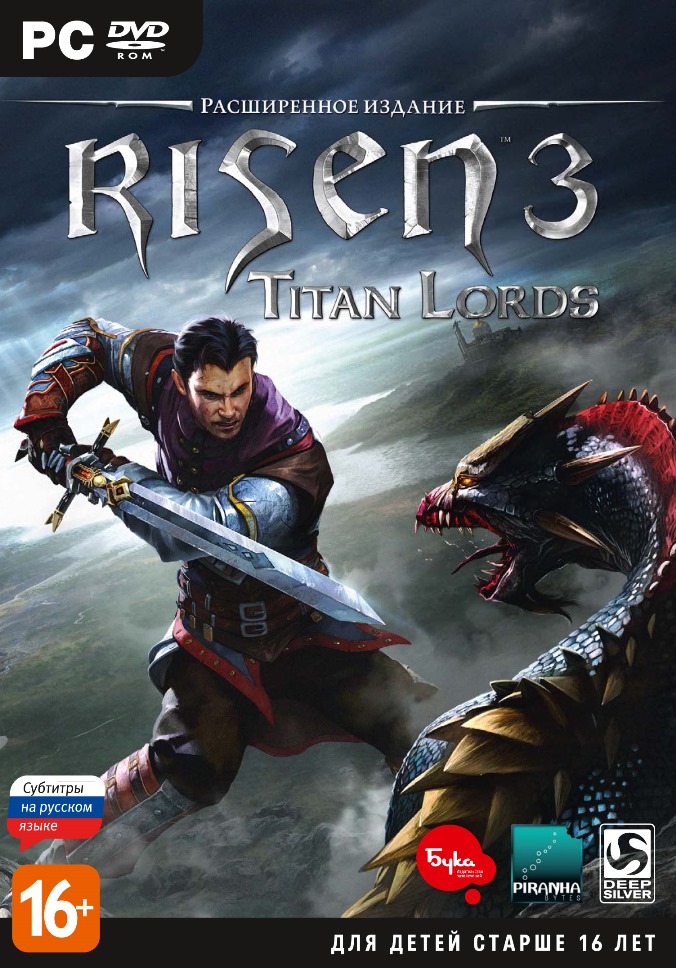 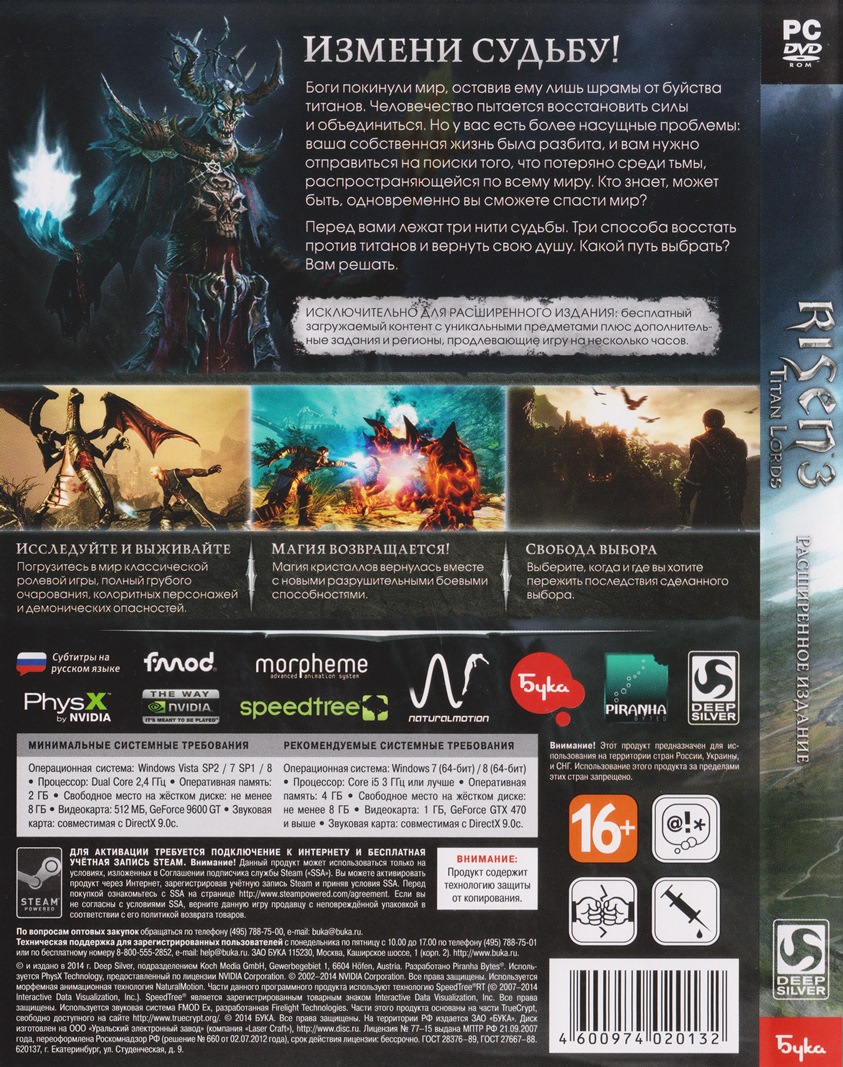 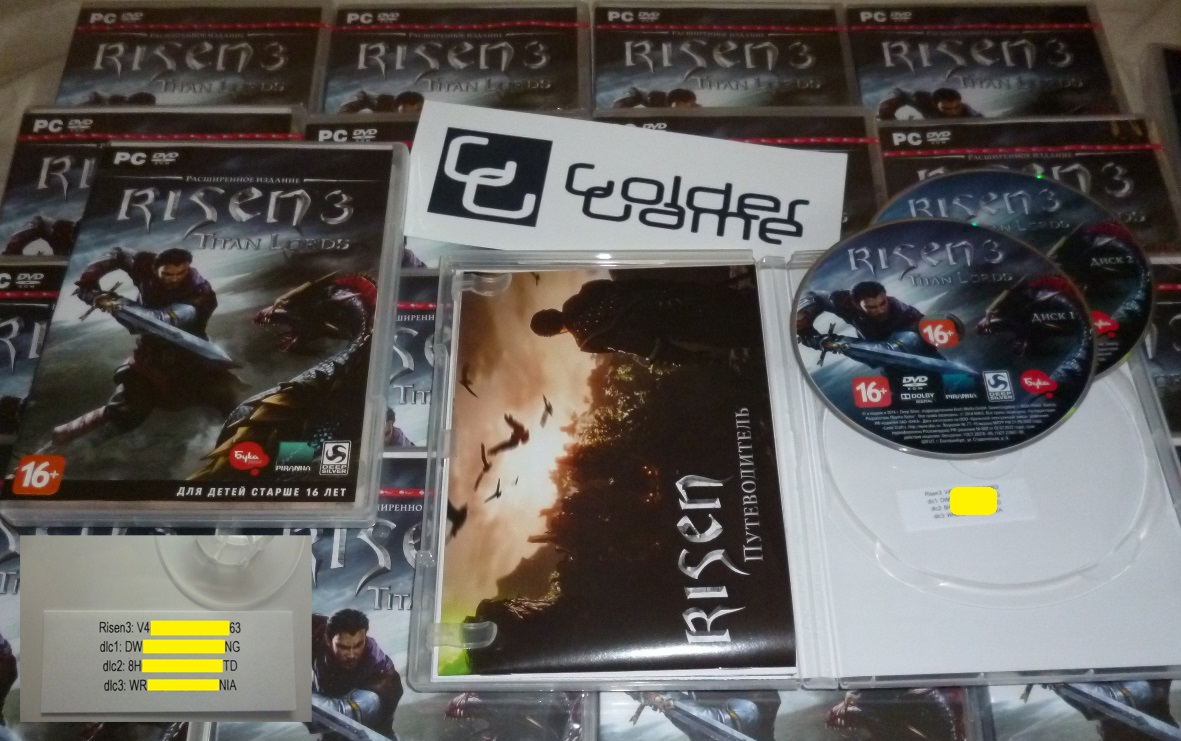 Uploaded: 14.03.2017
Content: P1560838.JPG 33,26 kB
Loyalty discount! If the total amount of your purchases from the seller GolderGame more than:
If you want to know your discount rate, please provide your email:

Paying this product you will get a license key activation PHOTOS out of the box game "Risen 3: Titan Lords" Expanded Edition for activation "Steam", from "Buka".


Welcome to the 3 Risen! The world forgot the gods and the Titans war-torn world where the threat comes from the ground. You - the young soldier gets a kick out of the shadows, deprived you of the soul. You need to hit the road to get back what was lost in the darkness and spreading across the world. You are not alone in their struggle: exiled mages can be powerful allies. But in order to get their help, you need to find them refuge on the island of Taranis, known as Island Thunder. There magicians protected under custody, plunged in the depths of Taranis in order to find the crystals filled with magical powers. Will you join the guards to seek help from sorcerers? Or your choice will fall to other guild? Recognize that the world of Risen 3 and fulfill his destiny!


As in the case of the cult series Gothic, Risen is a key element of the bright world and freedom in his study. World "Risen 3: Titan Lords" diverse, distinctive, full of life and is able to give the player a unique experience of classic role-playing game.


• Freedom. Explore the world completely free, handle the tasks at your convenience. Tasks can be performed in various ways and the result will be different. Come in the game and develop your character the way you want.

• Research. Discover new jobs and characters as they move in a diverse world of Risen 3: Titan Lords. The quaint medieval towns, damp and gloomy mines, supernatural world of shadows - all offers countless opportunities for exploration.

• A new combat system. Introducing amended by the combat system with new techniques and motions, bringing even more diversity in the battle.

• The magic is back! Magic crystals returned, bringing with them new devastating fighting capabilities. Master the elements of lightning, fire and ice. Crush your enemies, or use a variety of auxiliary magic skills to facilitate your journey. The choice is yours!

• Guild and factions. Join one of the three guilds unlike anything. Each of them will offer their unique equipment, skills and tasks, allowing you to completely different ways to achieve the goal. Expand the plans of smaller communities, trying to change the political balance in their favor. Be careful with those who trust - some of them can only pretend to be your friend, pursuing their own interests insidious.


The shares do not participate resellers!