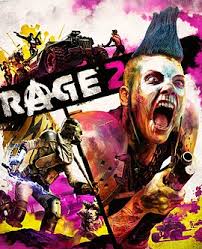 IMMEDIATE DELIVERY IMMEDIATELY AFTER CONFIRMATION OF YOUR PAYMENT!

After payment of the order, the system automatically (without our participation) will instantly send you a mail link to access the official game activation key - RAGE 2

Welcome to the gloomy post-apocalyptic world where chaos and lawlessness reigns! Thanks to the joint efforts of the developers of Avalanche Studios and id Software, the new crazy first-person shooter RAGE 2 will give you a feast of slaughter and freedom - you are free to go anywhere, shoot anything and blow up anything!

After the death of 80% of the world´s population, the pitiful remnants of the former civilization are struggling for life with all their might. Ruthless, bloodthirsty gangs are scouring empty roads, and a despotic government is trying to hold power with an iron fist. You - Walker, the last ranger of the wasteland and the threat of their regime. You were kidnapped right from home and left to die. Now you crave justice and freedom!
You have to fight with insane thugs in the open world with a variety of superpowers, as well as participate in machine battles to get the tools and technology to overthrow the repressive Government once and for all!

WELCOME TO THE SHOOTER UNIVERSE

The success of id Software in the field of creating shooters and the ability of Avalanche Studios to create open worlds make them a dream team for RAGE 2. This is more than a shooter, more than a game with an open world. This is a whole shooter universe.
NULL WAITING

In pursuit of the Government, travel across vast and varied landscapes, from wild jungles and deep marshes to scorched deserts. The wasteland is huge, and you have an arsenal to fight off every inch of it.
BLOW GAS TO FLOOR

Drive around the expanses of the game on steep wheelbarrows - from monster trucks to gyroscooters - ready for the conditions of the wasteland. If you see a car, then you can drive it.
LAST RANGER

Destroy enemies using a collection of improved weapons, the destructive power of nanotrites and the ability to squeeze the maximum out of the mechanics of your guns!
FRACTIONS AND ENEMIES

Fight for control of the wasteland against hostile factions, full of madmen, mutants and other monsters, bloodthirsty.

Key activation:
1. Register a new account or enter the existing one on https://bethesda.net/ru/dashboard
2. Activate the key.
3. After activating the game appear in the list of games and you can download it and play, everything is simple).

Gold in World of Warcraft