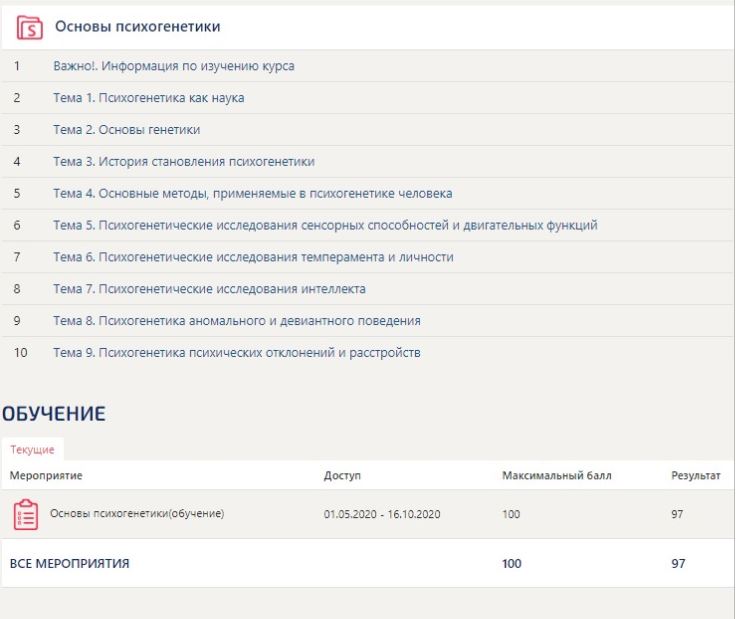 sinergey information about the seller and his items
offlineAsk a question

The base of answers to the test - Fundamentals of Psychogenetics Synergy (results OFF) The file contains 60 questions.

1. The mandatory requirements for measuring quantitative characteristics in psychogenetics include
Sample representativeness
Reliability
Validity
The presence of a standardized test
Multiplicity

3. The karyotype is ...
The composition of the individual genes
Haploid chromosome set
Set of chromosomes in somatic cells

5. The zygosity of the twins is ...
Homozygous or heterozygous state
Genotype Equality
Belonging to a certain type of twins
Identical
Origin from a single zygote

6. In the process of meiosis ...
The number of chromosomes does not change
Two eggs are formed
Four cycles of cell division occur.
Duplication of chromosomes occurs

7. It is not true that the phenotype ...
None in the early stages of embryonic development
Arises in the course of individual development
It is laid at the time of conception and remains unchanged
Entirely determined by development conditions
Genotype dependent

8. It is not true that the concept of “phenotype” can be applied to ...
Individual neuron
Blood protein factors
Single protein molecule
Behavior features
Higher mental functions

9. The twins can be unambiguously attributed to the elements of a common (divided) environment ...
Living conditions
Intrauterine environment
Parental attitude
Family library

11. Recombination of chromosomes and genes takes place ...
In the formation of somatic cells
In the process of crossing over
With any cell divisions
With mutations

13. Children of the same parents (not twins) are never genetically identical, because ...
crossing over can lead to the exchange of regions of homologous chromosomes
parents have different karyotypes
their conception does not occur simultaneously
recombination processes take place
mutations take place

17. In psychogenetics, a synonym for the concept of “dispersion” is used, it is “...”
standard deviation
correlation
assortivity
variability
phenotypic structure
interaction of genotype and environment

18. It is not true that quantitative variability may result from ...
genetic variation
environmental influences
additive gene interaction
interactions of two alleles

21. Similarities between relatives may arise due to ...
similar intrauterine developmental conditions
the presence of genes derived from common ancestors
similar environmental conditions
identical karyotypes of parents
gene recombination in parents

22. Heritability indicator is used to assess ...
the role of heredity in the development of an individual
similarities between twins
the contribution of heredity to the variability of phenotypes in a population
hereditary determination of the trait of a specific individual

24. There is no genetic variation (unless mutations are taken into account) ...
in the early stages of embryogenesis
with asexual reproduction
in cloned organisms
in isolated populations
in clean plant and animal lines

25. to the fundamentally important advantages of peas as an object of research in the experiments of G. Mendel should be attributed ...

29. When raising MH twins, you can get positive effects if ...
put them in different kindergarten groups and different school classes
give everyone a separate order
dress them alike
do more with each individual
emphasize their similarity
try not to separate them
give them more time to spend with each other

30. The decoding of the nucleotide sequence in the DNA chain is ...
sequencing
broadcast
splicing
transcription
restriction

31. maternal effects in development include ...
maternal care and education after birth
features of the intrauterine period of development
mutations in the germ cells of the mother
mother crossover frequency
ovum cytoplasmic effects

33. phenotype ...
this is a group of organisms with a certain combination of characteristics
formed under the influence of genotype and environment
this is the totality of all the signs of an organism at a particular moment in its life

34. speaking of traits in genetics, it cannot be argued that ...
with discrete variability, there are no intermediate forms
discrete features are characterized by continuous variability
qualitative features relate to polymorphisms
discrete discreet behaviors
the frequency of occurrence of discrete characters in populations is unchanged

60. Recombination of chromosomes and genes takes place:
during meiosis
in the formation of somatic cells
in the process of crossing over
with any cell divisions
with mutations

The Basics of Psychogenetics - Synergy Test