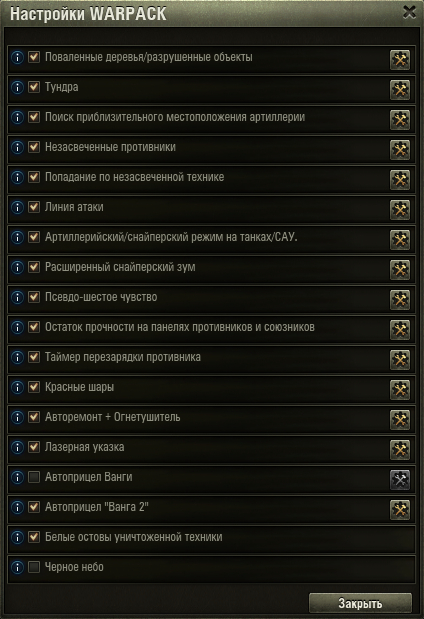 Uploaded: 05.08.2020
Content: text 23 symbols
Loyalty discount! If the total amount of your purchases from the seller Best-Sales more than:
If you want to know your discount rate, please provide your email:

is the latest assembly of paid cheat mods for World Of Tanks, which has been pleasing its users for more than 3 years, is constantly updated and updated with new, rare cheat modifications. With the huge functionality of these mods, you can shoot with automatic lead both on tanks and artillery, use Achilles´ sight (test version) to target vulnerable points on the armor of enemy vehicles, automatically repair, treat the crew and put out the fire using simple repair kits, first-aid kits and fire extinguishers, see the movement of the enemy on the minimap as well as his reloading of guns. Gunners will be able to easily track the location of the shot of the enemy brother and destroy it.

Thanks to Warpack mods, the game process becomes much more interesting, and your skill level is much higher.

These keys are only for the Ru server of the game!