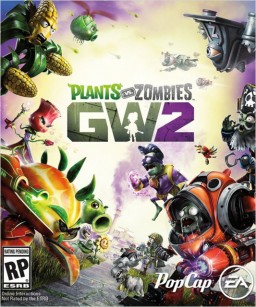 Loyalty discount! If the total amount of your purchases from the seller Media_market more than:
If you want to know your discount rate, please provide your email:

Description:
Battle for garden plots is reaching new heights in Plants vs. Zombies Garden Warfare 2!
In this fun and dynamic shooter zombie head doctor Zomboss gathered a myriad army and built on the plot real zombie utopia. But hope springs eternal! For the first time in franchise history the plants are broken from their homes and go on the attack.

Play for vegetable army in the new regime "Flora attack» (Herbal Assault) for 24 players or choose a side in a single or cooperative play for four players!

Plants are going to storm - the first time in franchise history to join the battle on the side of the zombies. Play for vegetable army in the new regime "Flora attack» (Herbal Assault) for 24 players or protect Zomburbiyu in cooperative play for 4 players in the "Hereafter special forces» (Graveyard Ops).
Characters of all time - Lift strategic planning to a new level, using 14 character classes and more than 100 plants and zombies that are available for the game, from the present, past and future.
The game is for everyone - More than 7 gardens await you in an insane battle network for 24 players in the "Flora of attack» (Herbal Assault) or "The rebels from the garden» (Gardens & Graveyards). Choose between zombies and plants in cooperative play for four players or spend a single player against the AI or a friend on a split screen in any of the game modes (no Xbox Live Gold or PS Plus).
Wildlife PvZ - Fight for Croft broke out with renewed vigor, the fighting raging humor and fun to the 12 cards, flooded Zombossa troops and aircraft. You have yet to discover all the secrets of this world.
Buy Plants vs. Zombies Garden Warfare 2 "1C Interest" and participate in exciting online battles plants and the walking dead.

Activation of the game:
1. Download and install the Origin program. (Http://www.origin.com/download)
2. Start Origin.
3. Select an interface language, and the place where the game is installed.
4. Go to "Origin-Configure and manage."
5. Select "Activate product code."
6. Enter key received after payment.
7. After the activation of the game will be a bookmark to your profile and a list of activated games.
8. Select Battlefield 4, and then press "Start".
9. Download and install the game.

Plants vs. Zombies GOTY: Game of the Year Edition STEAM