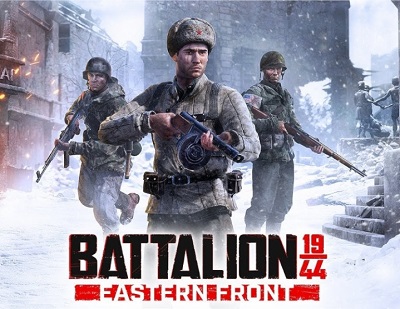 Uploaded: 25.02.2020
Content: BATTALION 1944_4.txt 0,24 kB
Loyalty discount! If the total amount of your purchases from the seller GameCod more than:
If you want to know your discount rate, please provide your email:

Battalion is an ode to your favorite competitive shooters and classic gameplay in a new generation of game. Win 5-on-5 dynamic battles using a variety of weapons and tactics.

In addition to the game itself, the Battalion 1944: First to Fight Edition kit includes a digital copy of the game´s soundtrack and military kits (5 pcs.), As well as an exclusive weapon coloring for this edition.

GAME FEATURES:
- FACEIT - the highest level of competition competition Battalion 1944 - the first game in which the set of multi-user tools FACEIT is fully integrated. FACEIT brings to Battalion 1944 a world-famous and high-quality selection of opponents depending on their skills, tournaments, ratings, leaderboards and a desperate struggle for first places.
- “Frontline 5 on 5” - with a FACEIT rating. Attack / defense scenario 5 on 5, in which the first team wins in 16 rounds. Hone your tactics, running timings and accuracy in this intense competitive game mode. Every life matters, and every shot counts.
- “1-on-1 Hassle” - FACEITYou, your rifle and target, trying to do everything in her power to stop you. Will you be able to defeat the enemy before he defeats you?
- Arcade mode - Quick fun with cannons Capture the flag, control territories or just become the best sniper on the server - Arcade mode Battalion 1944 offers a wide range of game types for both amateurs and real shooter fans.
- War of Nations - Eastern Front In addition to the troops of the United States and Germany, you can now fight on the Eastern Front for the Soviet Union. Arm yourself with a rich arsenal of period-specific weapons, from precision magazine rifles to rapid-fire machine guns.
- Battle rating - Earn and unlock Take the test, get medals, upgrade your rank and climb up the leaderboard and unlock free battle coloring for weapons in each new season.
- Match history and replays Have you shown yourself brilliantly or want to analyze the failures? The built-in capabilities of the 1944 Battalion for recording gameplay allow you to raise the statistics of matches and watch replays from the first and third parties and with a free camera.
- Tools for authors of mods and dedicated servers Free tools for creating game modifications and launching dedicated servers allow anyone to launch their own Battalion 1944 server and configure it to their liking, making it unlike everyone else. Well, if you want to create game modifications for the 1944 Battalion, it is only up to the desire.