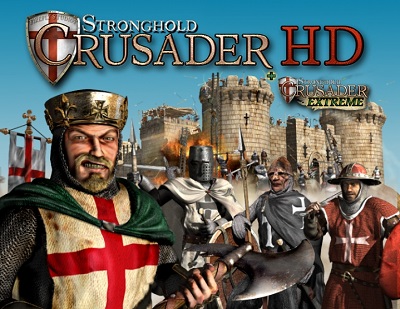 Reach faraway Arab lands in the famous castle life simulator Stronghold Crusader HD. The long-awaited sequel to Stronghold’s bestselling book, Crusader will throw you in the historical battles of the Crusader era against insidious AI opponents in 4 historical campaigns and more than 100 unique missions.

History:
Take the Crusades as Richard the Lionheart and Saladin, Sultan of Syria. Lead the army of the Crusaders, whose courage has been forged in the hot deserts of the Middle East for centuries.

HD Edition:
Higher resolution graphics give you the most control over your army. The new battlefield in HD will enable you to scale the screen in real time, showing the entire map in a single window. Go around the enemy from the flank, directing the main striking force at his gate. Simulate a retreat and lead the enemy into a deadly trap, watching him defeat.

GAME FEATURES:
- Join the Crusade or the troops of Saladin in 4 historical campaigns.
- Complete 100 unique missions, each of which is more difficult than the previous one.
- Create your own castle with efficient economy and death zones.
- Control new units and unique skills, including assassins and horse archers.
- High-resolution graphics allow you to see the entire map on one screen.
- Support for Steam Cloud for saved games.
- Compatible with Windows XP, Vista, 7, 8 and 10.