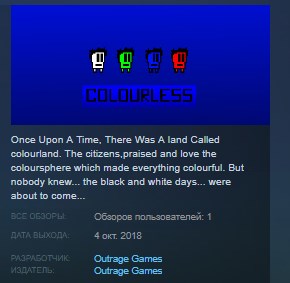 Once Upon A Time,
There Was A land Called colourland.
The citizens,praised and love the coloursphere which made everything colourful.
But nobody knew...
the black and white days...
were about to come...

Colourless is a platform indie game in which the player uses the power of colours to save Colourland.

The game consinsts of four chapters and in each one the player faces different obstacles. The colours aid him to get through as they enhance him with interesting abilities. As the game progresses it gets more and more difficult and the tools the player has change.