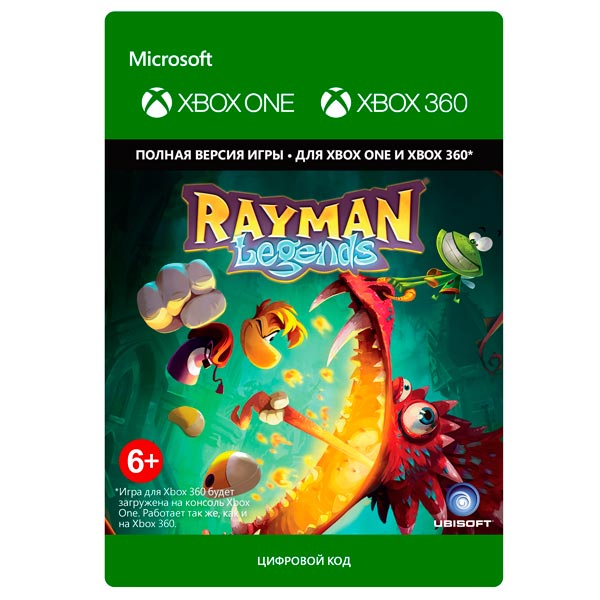 Aleksandr000123 information about the seller and his items
offlineAsk a question

The code will come immediately after the purchase, automatically displayed in the browser window and will come to your email

Territory of activation and use only RF

About the product
Video game Rayman Legends - the continuation of the adventure in the cartoon style. Peace reigned in the world, Rayman and his friends fell asleep for 100 years. But during this time, nightmares began to fill the Earth again, and the dark magician recovered after defeat and became stronger than ever. Gamers will need to help him restore order, free the prisoners of the forces of evil and destroy dangerous opponents in different worlds.

NONLINEAR PASSAGE
Unlike the previous parts, Legends does not necessarily follow a strict order when choosing levels - you can select any of them in the main menu. But it is worth remembering that the level of complexity increases, so the initial training will be very useful for achieving the goal.

ADDITIONAL CONTENT
In addition to the main storyline, the game features mini-quests, musical levels, re-arranged episodes from Rayman Origins, and multiplayer tests that allow you to participate in solving puzzles with friends.

ORIGINAL GAMEPLAY
Now Rayman Murphy´s satellite can be controlled by the player. He is able to inflict additional damage to opponents, penetrate hard-to-reach places, free prisoners and participate in solving complex problems.

CODE ACTIVATION THROUGH THE INTERNET: You have a Microsoft account or Xbox profile
Live? Just log in with your credentials on page
xbox.com/redeemcode and enter the 25-digit code. You have not yet registered on the site?
Go to xbox.com/live and follow the instructions to create a new account.
then enter the 25-digit code. Learn more about Xbox console redemption.
see xbox.com/howtoredeem-console.

Black the Fall Digital version of the Xbox game