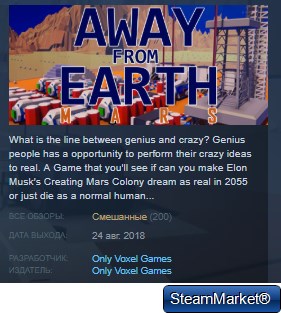 What is the line between genius and crazy? Genius people has a opportunity to perform their crazy ideas to real.
A Game that you´ll see if can you make Elon Musk´s Creating Mars Colony dream as real in 2055 or just die as a normal human. The worst possibilites that it can be and versus unkonwn enemies and time. You´ll need to control everything as best as it can be.

Create your own Colony in mars with collecting Mars´s Irons, Golds and Diamonds. Create big electric and water systems to make your Colony better. To Cover your people you need to use your turrets as best as it can be. Make your colony bigger as faster by collecting metals.

1. Discovery Vehicle: It made for Mars´s low gravity and it has in-side unlimited oxygen. This oxygen will let you go more far away easier.

2. Discovery Ship: It has two great cameras and it can fly however you want.

In-Game, there are two types of Energy Source (Water Engine and Electric Engine).

Use your engineer abilites to create water and electric cable systems to make your infrastructure´s better.

You need to use more Oxygen Machines to make your city but it will need more water & electric generation.

To stay safe from enemies, you need plant Turrets as best as you can. Else, they can broke your all colony in just a night.

To make all colonies and do other stuffs you can use your both technology lazer weapon.