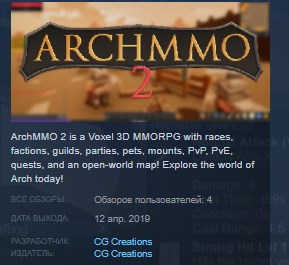 ArchMMO 2 is being upgraded and developed every day, and now, it´s on Steam. Steam is the best platform for an indie game to gather attention. Thank you for playing ArchMMO 2, and I can´t wait to see what´s going to happen in the future!

Currently, Weapons are a big thing I want to keep adding to. Every update will include new weapons, up to level 50! This will increase a large amount of gameplay!

GOALS
Quests, quests, quests! A needed addition to all MMO´s. I am working extra hard on creating meaningful quests for the Human class in the game. Currently, the human class is the only fully supported class. The Undead will be after at-least 50+ quests are made for the human race. More quests = more enemies, more items, more weapons, and more people.

Magic and Skills are also a hugely important part of the game. I want to have some creative buffs, debuffs, and castings. This is all being implemented in a later update. Quests and items are the priority right now.