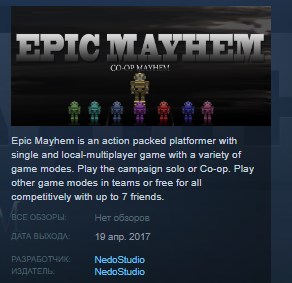 Epic Mayhem is a Platformer with Single player and Local-Multiplayer game modes.

Multiplayer modes has Players either work together, in teams or have a free for all in which each player tries to get ahead of the others.

Avoidance mode, Players have to to avoid all the death balls on stage and the last person standing wins. The player with the most points at the end of set rounds wins.

Run Race, Player have to simultaneously race in a stage to reach the end while avoiding the obstacles.

Touch Mode, in this mode players have to rush to touch the gold orb while avoiding the death orbs, the first player or team to get the high score wins.

Soccer mode, this game takes its inspiration from a game called Head Soccer on android, a game in which players have to get the ball to the opposing teams side while avoiding having the ball reach their side and also the death balls.

Car Race, Players take control of cars and race to the finish line, players can collect power-ups along the way and either lay mines to slow other players of get nitros for a boost of speed

Please note, Although Keyboard keys rebinding is available, for the best experience with this game a controller is recommended.