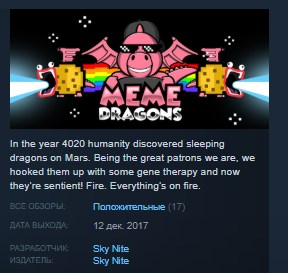 In the year 4020 humanity discovered sleeping dragons on Mars. Being the great patrons we are, we hooked them up with some gene therapy and now they’re sentient! Let’s teach them internet humor! Huh, they seem to really like the the early 2000s.

Fire. Everything’s on fire. Oh and now they’ve invented teleportation. That’s fine. Everything’s fine. But if you could get over here and stop them from reaching earth, that´d be great.

Meme Dragons is a silly, sci-fi VR arcade game for all demographics. For VR newbies, it´s a chance to see why the physical immersion of VR is so great, without having to worry about complex controls. For gaming vets, its a carefully designed challenge meant to keep you playing for hours chasing that next high score.

Also, if you´re looking for an exercise game, the addition of throwing weapons by end of 2017 will likely make this the most efficient VR workout on the market, since dodging is your primary survival mechanic and the throwing weapons force constant arm motion.

The final version of the game will have:
- 2 to 3 more weapons, each with its own scoreboard
- 1 more game mode
- possibly other features such as pay-to-win micro-transactions LOL JK

For only the cost of a meal, go to space, kick pink dragon butt, ROFL at an insane developer´s meme humor, and sweat your way to personal achievement dopamine release!