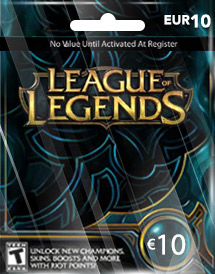 Loyalty discount! If the total amount of your purchases from the seller AliGame more than:
If you want to know your discount rate, please provide your email:

Notes:
- Riot Points given may vary from one region server to another.
- This product is redeemable on the Europe West League of Legends server only. (NOT work for EU Nordic/East)

Do your friends play League of Legends? League of Legends or fondly known as LOL is a fast-paced, competitive online Multiplayer Online Battle Arena (MOBA) game that blends the speed and intensity of an RTS with RPG elements. Two teams of powerful champions, each with a unique design and playstyle, battle head-to-head across multiple battlefields and game modes. With an ever-expanding roster of champions, frequent updates and a thriving tournament scene, League of Legends offers endless replayability for players of every skill level.
Join the world´s largest online gaming community in LOL. Make friends, form teams and battle tens of millions of opponents from countries across the globe, then exchange strategies on Reddit, YouTube, the forums and beyond. LOL EUR10 Riot Points Card is a convenient way to purchase Riot Points without the requirement for a credit card or bank account. Get LOL EUR10 Riot Points Card for your friends to get the latest LOL Champion, Champion Skins, Ward Skins, Summoner icon, and Runes Page.

HOW TO REDEEM LEAGUE OF LEGENDS RP CARD (EU WEST)?

1. Go to the store and click "Purchase RP".
2. Select the "Prepaid Cards" payment method.
3. Enter the pin code.
4. Press the "submit button" to complete the transaction. Enjoy your RP!