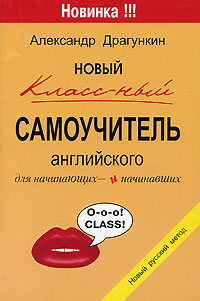 PlatiRu_Sell information about the seller and his items
offlineAsk a question

"Russian" method of learning English actively takes an interest in a foreign country, and the book A.Dragunkina sales leaders not only in Russia and in neighboring countries, but also in other countries: in the US, Canada, Germany, Israel - everywhere which is home to the Russian-speaking population. Some of his books have been translated into other languages, including such "exotic" as the Lithuanian, Latvian, Russian, Tatar, Mongolian, Armenian and Hungarian!
From this academic year in the Northwest branch of the International University started training on methodology A.Dragunkina and open "Department of innovative methods of learning foreign languages" under his leadership. It is expected that in the near future, this technique has become commonplace - in fact, anyone acquainted with her, can now say with confidence:
"I want and I can speak in English!"