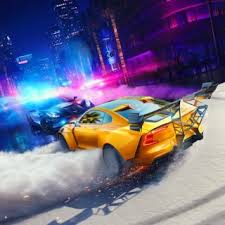 luchshy information about the seller and his items
offlineAsk a question

After the purchase, you get an account with the game Need for speed heat as well as a possible bonus
as a bonus, it can be various games on the account

Need for Speed ​​Heat is a computer game in the genre of arcade racing developed by the Swedish studio Ghost Games and published by Electronic Arts for the for PCs running Windows. The twenty-fourth game in the eponymous series, which was released on November 8, 2019

The story of NFS Heat begins with television news, which tells about the creation of a special unit to combat night racers, led by police lieutenant Frank Mercer, whose main task is to end night races. After this, the race begins, during which the police appear, and one rider, trying to hide, rushed to the bridge. But Shaw, one of Mercer’s men, severely damages the rider’s car and eventually it falls into the water. The racer managed to jump out of the car, but Shaw begins to kick him, but he is stopped by the recently arrived Mercer, who has the idea that the caught rider can become a messenger for the rest - he will convey a message from Mercer that "the night races have come to an end." But Eva Torres, the assistant to Mercer, who arrived at the scene of the accident, indicates that everything will be known to the authorities, which Mercer uses his laptop to turn off the nearest cameras and delete the recordings of what happened. After which the police leave, and the rider leaves the city. After a while, Ana Riviera appears there, who is surprised to learn that the driver leaves the city with his brother, and thus her team broke up.

Rules:
1) guarantee at the time of sale - 100%
2) If you have problems (non-functional account) must be written in the "Correspondence with the seller" within 15 minutes of purchase
3) In the time of purchase to record video from the time you click "Buy" for a speedy solution of the problems (in the absence of a video, even if it is necessary to attach screenshot)
4) Please do not leave negative feedback to receive a response from the seller within 24 hours. Please be patient