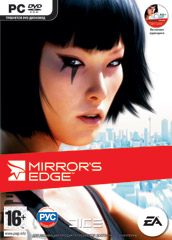 donoben1 information about the seller and his items
offlineAsk a question

The main heroine of the game - Faith earns that brings much valuable information, traveling on the roofs of the city, where the police seldom look.
However, this time, a lover of parkour got into a real mess - her sister was accused of a murder she did not commit. All that remains Faith - is the most to undertake an investigation and punish those responsible.

Features:
• For an experienced stuntman roofs of several buildings merge into a single platform - just need to efficiently take advantage of the terrain. Jump, slide, pushes away from the walls, walk on his hands, tumble, pull up, run! You will risky parkour at an altitude of several hundred meters - the constant risk of falling down tickles the nerves and drives the soul in the heel.
• In Mirror's Edge is not the player and his character, there is only you - a girl named Faith, running at breakneck speed on the roofs. The unique animation and first-person view provides an unprecedented immersion into another reality. You will feel under his hands rough concrete, feel the thrust at the feet of hard surface after a successful jump. World shaken before your eyes when you hang on the crossbar over the abyss, and a convulsive shudder, if you do not manage to dodge the bullet. Looking from the roof down, you'll forget where you are in reality, and become a shiver of fear, while adrenaline disperses throughout the body.
• You try to stop, but the skill, care and first-rate reaction will help to overcome all difficulties. Dodge bullets, slipping away from the blows, crush enemies sudden outbursts, luring them to the edge of the roof and send down! Having seized their weapons, you can protect your life in a firefight.
• You - Begun by God, endowed with a rare ability. You will immediately notice all the objects around us, which may be useful in the next trick. With such a useful skill, you can easily associate the individual jumps and somersaults in a harmonious series of graceful maneuvers. Run forward without stopping, and the journey becomes a thrilling shot on a sparkling roofs towards freedom!

Instructions on how to activate Mirror's Edge:

1. Download and install the EA Downloader - Origin. (Http://www.origin.com/download)
2. Start EADownloader - Origin.
3. Run the EA download manager and on the "Activate" enter the purchased key
4. Log in using your e-mail and password specified
when registering on the website of EA. If you have not registered on this site, create a new account.