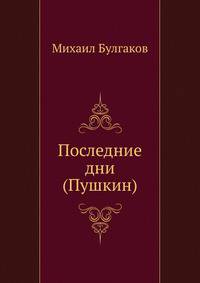 It is possible that the idea to write about Pushkin arose in Bulgakov even in Vladikavkaz, at least in the "Notes on the cuffs", he expressed his love for the great writer, protecting it in a debate on the rabid attacks Proletkult wing. About Pushkin at the time I wrote a lot, and many, and in 1937 was supposed to mark the 100th anniversary of his death: the theaters were ready at that time to put the play. So the idea to write a play "Aleksandr Pushkin". Bulgakov read primarily of Pushkin, his letters, diaries, memories of him and his time, of his contemporaries. Especially carefully he studied all the material about the poet´s death. And there he found a lot of contradictory materials, which needed a critical use. First of all, he set a goal - "to revive the past century in all its truth."