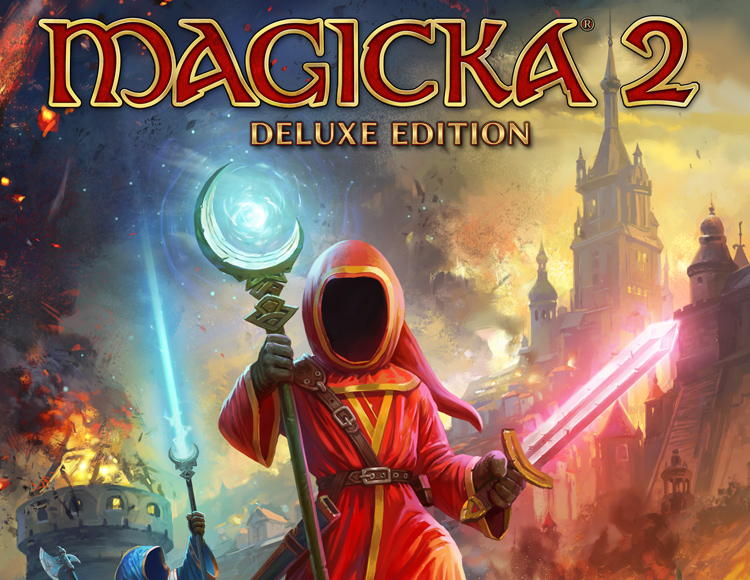 Uploaded: 17.05.2020
Content: text 17 symbols
Loyalty discount! If the total amount of your purchases from the seller RPG-MARKET more than:
If you want to know your discount rate, please provide your email:

You buy the official key of the game Magicka 2 Deluxe. After the first purchase, you will receive a discount on all subsequent purchases of our products.

You will receive the game key Immediately after payment, in the window that will open after the payment is made, as well as a link to the page with the key will come to your e-mail specified at purchase.

The most hooligan co-op adventure is back! In the new Magicka chapter, players rise from the ruins of Aldreheim Castle to find Midgard practically cleansed of wizards. Only a few remained alive after the War of the magicians, and even those became insane or became incredibly hostile to all living things.
To rid the world of evil again, the four wizards and their guide Vlad will have to go through the dangers of Midgard, armed with an updated version of the famous Magicka spell system. Players will again try on the mantles of excessively strong and unexpectedly funny wizards in the entire fantasy genre!

• Learn to conjure in a new way! Like any omnipotent magician, you will be subject to thousands of spells. Experiment with them to crush evil and help partners in battle.
• Combine up to five elements at a time to work together or against your friends.
• A cooperative game with active "fire in one´s own."
• All levels and game modes in Magicka 2 are supported for a four-player game. Players are available quick connection, checkpoints and other functionality.
• “Fire in your own way” is always on: destroying enemies will be even more fun if you accidentally injure or kill one of your friends.
• Overcome insurmountable challenges in Challenge mode
• Be the sorcerer you always wanted to be. A huge number of mantles, magic staves and other weapons will allow you to create a magician to your taste, to wreak havoc among hordes of fantastic creatures. Experiment with the dynamic Magicka 2 spell system and find the right spell just for you. Add to all the above the possibility of a cooperative game and the included "fire on their own" and you will get a recipe for catastrophic fun.
• Replay the next chapter with “artifacts”. Magicka 2 players have an exciting plot and a colorful fantasy world inspired by Scandinavian folklore. The novelty of the gameplay is “Artifacts”, with the help of which players will be able to customize and change the rules of the game to make it more fun to pass.

- One of the three buyers in a random order, leaving a positive review after purchasing the game, can get a gift game activation key. Which one you will learn after receiving the key.
- To receive a gift, you must leave a positive review and add to it a request for a gift (Keys will be sent out within 48 hours from the moment of writing the review).
- A gift will be given to one of the three who wish, and not absolutely everything.
- After writing a positive review, you automatically agree to the above conditions.