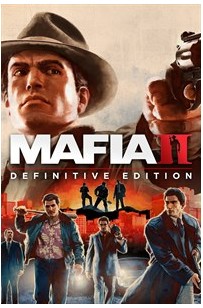 Uploaded: 26.07.2021
Content: Cod8.txt 0,51 kB
Loyalty discount! If the total amount of your purchases from the seller slonimus more than:
If you want to know your discount rate, please provide your email:

ABOUT THE GAME:
Includes main game and all DLC releases.
Part two of the Mafia crime saga – 1940’s - 50’s Empire Bay, NY
Remastered in stunning HD detail, live the life of a gangster during the Golden-era of organized crime. War hero Vito Scaletta becomes entangled with the mob in hopes of paying his father’s debts. Alongside his buddy Joe, Vito works to prove himself, climbing the family ladder with crimes of larger reward, status and consequence.