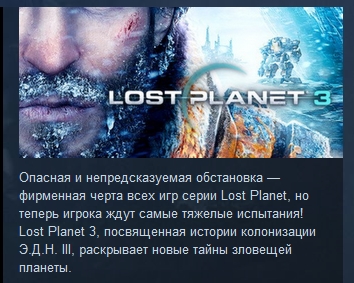 The sequel to the fantastic action game Lost Planet reveals terrifying new details about the notorious planet E.D.N. III and the history of its colonization by humans. Extreme, danger and thrill Three times more than before!

The protagonist of Lost Planet 3 is pilot Jim, who left Earth to fulfill a very difficult and risky, but very lucrative contract with Neo-Venus Construction Corporation (NEVEC), which prepares the planet for colonization. Arriving at E.D.N. III, Jim joins the pioneers at Coronis and begins exploring unexplored territories and mining samples of thermal energy - a valuable resource necessary to survive in the extreme conditions of a harsh planet.

NEVEC´s reserves of thermal energy are running out, so the fate of the colonists´ mission at the Coronis base depends on natural sources that they manage to discover and master. Realizing perfectly well that this is a great opportunity to hit a big jackpot and even ensure himself a quick return home to his family, Jim decides to challenge the inhospitable planet and its original inhabitants - aggressive and bloodthirsty Akrid.

A new journey to the famous Lost Planet universe - to the ice planet E.D.N. III, which has become a giant battleground for survival, the planet is even more dangerous, volatile and unpredictable than before.
In this story, you are assigned the role of not a superhero, but an ordinary hired worker who risked confronting a hostile alien nature, and his goal is not to save the world, but simply to make good money and return to his family.
You will have to learn how to defend against the terrible Akrid and survive in the most severe ice storms mainly with the help of various futuristic economic and construction equipment and tools, although you will also have weapons.
Fights using technology - with a first-person view, shootouts, during which the hero moves on foot, - with a third-person view.
The game was created on the engine Unreal Engine 3, which means that you will find a spectacular video sequence and addictive and dynamic gameplay - believe me, there will be no time to relax.
Since the release of the first two parts of the series, the Akrid have become much larger, angrier and smarter, so it will not be easy to fight them - you will have to use different tactics in each battle.
Planet E.D.N. III keeps many secrets, and while searching for sources of thermal energy, Jim (and along with him, of course, you) will learn a lot of interesting things about this amazing land. Love multiplayer The game offers a wide range of multiplayer modes for you - have fun and improve your fighting skills in the fantastic world of Lost Planet.

After purchasing the goods, you must report the received unique code in the messages to the seller, then the goods will be issued to you.
Before each sale, the goods are checked for performance personally by the seller. Claims will NOT be accepted and returns / replacements will NOT be offered.
For any problem, write to the seller in messages.