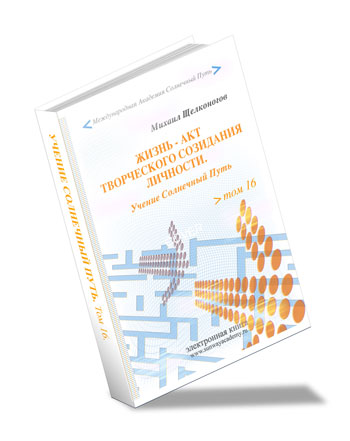 Uploaded: 12.12.2009
Content: sw_kniga_16_opt.pdf 2004,66 kB
Loyalty discount! If the total amount of your purchases from the seller Щелконогов Михаил more than:
If you want to know your discount rate, please provide your email:

Contents:
1. From the author.
2. They say the students ...
3. Life - an act of artistic creation Personality.
4. Methods of SP. "Not the place makes the man, but man the place."
5. Guidelines addressed to the disciples IMTA.
6. Used and recommended reading and videos.
7. Answers to questions.
8. Creativity. A.Yundin. Sunny Path and business ethics.
9. School and Students.

Words, voices, gestures, movement, light, music, idea, play - we played the show, and we're sitting in the audience hall, a love of the people on the stage, sympathize, empathize, cry and laugh, or not.

I think that the expression "to work and reward" speaks about how a job well done. Not quantity, but quality. After all, the same thing can be done in very different ways. It would seem that everything is the same, but how much emotional energy invested, leaves its mark.

Now everything is in my hands. I became stronger, wiser, actions consciously. There is satisfaction, which means that all that preceded it, has the same meaning as the present.

Ever since I started training a year has passed, I became much more independent, with money and so on. It became harder to treat myself, listened to myself, learn to listen to your inner voice. Attitude has become clearer, just grown up, and most importantly, I learned to think long before you do something.

I do not know why, but I was given a huge credibility, what I did not expect to receive. Now I have a very good recovery results. In addition to the health gave me peace of mind and energy. With the study, too, all is good enough. With me was a small miracle. Coming to settle a commercial agent in the newspaper, I three days of probation was the technical editor.

It is becoming a tradition that the first chapter of each stage is a kind of synthesis of the previous material. To summarize our thoughts on the continuous self-improvement, leading us to the ideal and is the meaning of our life, we can say that all human life is a process of knowledge first, and then the creation of our true self, entering in the end, in cooperation supermarket with himself.

Personality - a man with a face and the face - it is always the property, individuality, do not merge with the general background, mask, light-emitting energy. Even with a twin brother, you still will be unique. Personality - a man who has not only and not so much a strong individual character as reserves on everything he touches, the following individual labor and creativity. The greater this track, the more influential the person, the more valuable to society people. For his work and creativity are descendants future.

The main marker of identity - his own personal opinion - is related to the Genesis and its phenomena, which is based on individual system outlook (worldview and outlook).

Q: How similar and how different personality and individuality?
Answer: Individuality - the biological individual, unique living unit of the biosphere, for example, birch leaf also individuality. Personality - a unique active principle, striving for harmony trinity of man, capable to influence the processes of evolution. Personality developed and implemented only on the basis of individuality.

Q: What if you podsizhivayut at work, survive from the place, but you do not want to go?
Answer: Everything in the world has its own reasons - it is an axiom ...

Related to item "Life - an act of artistic creation Personality.":

Life - an experimental science. The principle of hard Yes.