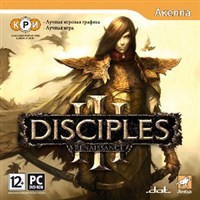 Loyalty discount! If the total amount of your purchases from the seller GameMarket more than:
If you want to know your discount rate, please provide your email:

After purchase, you get a scanned image of the activation key of the game «Disciples III: Renaissance" (officially distribute the product in the territory of Russia by Akella).

Continuation of the legendary project, is considered one of the best in the genre of turn-based strategy. «Disciples III: Renaissance" - a beautiful fantasy world inhabited by terrible monsters and brave heroes. Not deviating from the canons of turn-based strategy game brings many innovations to the genre, giving the opportunity to feel the real leader of magical armies.

In the «Disciples III: Renaissance" will be available three player races: Empire, the Legions of the Damned and the Elven Alliance. Each of them has its own heroes and characters, whether it warriors or mages, as well as the original tree structures. The game is fully three-dimensional: Instead of static pictures are waiting for you detalizovannye 3D models of cities and warriors. Menu construction has also changed. When selecting the building displays a list of its improvements, determining the development path of the warrior. Besides all this, players will be presented entirely new combat system.

In the future we plan to add an editor that allows you to create maps both of ready-made objects, and using the rich possibilities to change the landscape: terramorphing and restructuring of the surface, painting, integration of arbitrary geometry.

To play the game you need distribyutiv. Link to our customers on request (torrent file).

You need have latest updates for the game - http://ru.akella.com/Game.aspx?id=378&mode=patches

Note: when you reinstall the game you need to cancel a previous activation (key can only be activated twice).