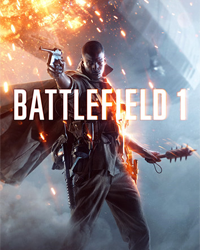 Loyalty discount! If the total amount of your purchases from the seller Media_market more than:
If you want to know your discount rate, please provide your email:

The base game of Battlefield 1
Witness the dawn of world wars in Battlefield 1. Open a new world in an exciting campaign or join large-scale network team battles with support for up to 64 players. Fight as a foot soldier or control amazing vehicles on land, in the air and at sea.

Battlefield 1 Premium Pass
Four theme additions with new network cards, new weapons and much more.
Battlefield 1 They Won´t Pass
Battlefield 1 "In the Name of the King"
Battlefield 1 Waves of Change
Battlefield 1 Apocalypse
The Red Baron, Lawrence of Arabia and Hell Fighters sets with thematic weapons, equipment and emblems based on famous heroes and units of that war.

By purchasing digital goods of good quality and the exchange of no return
The reasons, the nature of which is associated with the personal perception of the buyer of the game qualities, such as graphics, game speed, difficulty of the game or the game controls, and the like are not the basis for the exchange and return of goods.


Activation of the game:
1. Download and install the Origin program. (Http://www.origin.com/download)
2. Start Origin.
3. Select an interface language, and the place where the game is installed.
4. Go to "Origin-Configure and manage."
5. Select "Activate product code."
6. Enter key received after payment.
7. After the activation of the game will be a bookmark to your profile and a list of activated games.
8. Select the Battlefield 1 and press "Start".
9. Download and install the game.