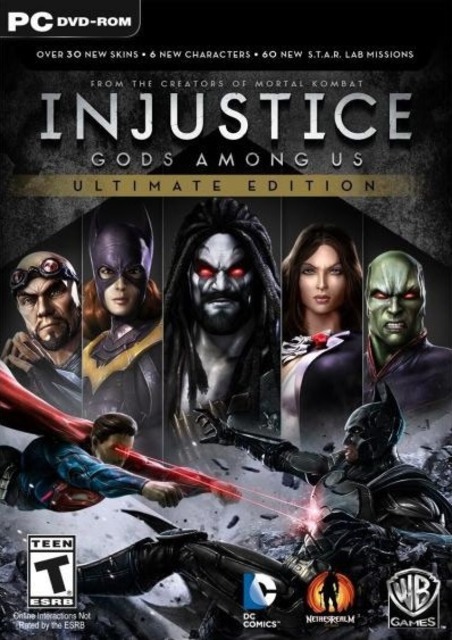 Uploaded: 30.11.2019
Content: Injustice_164.txt 0,24 kB
Loyalty discount! If the total amount of your purchases from the seller GameCod more than:
If you want to know your discount rate, please provide your email:

Subscribe present case within 48 hours after writing a comment.
Warning !! Gambling Review - You warrant that you have read all the conditions for a gift, and if something is not clear - ask.

The scope of Injustice: Gods Among Us. Ultimate Edition in addition to the original game about the battle of the famous heroes of the DC Comics universe includes an impressive array of additional materials:

CAUTION The key can not be activated in Origin.

Injustice: Gods Among Us is finally out on the PC, and once in the extended edition, which includes all previously released additional materials.
On the bright arena fighting religious characters DC Comics, but because the game is of interest not only for fans of the genre, but also for fans of comics, which significantly expands the audience.
Each of the characters has outstanding games, sometimes superhuman abilities, and because the battle promises to be incredibly entertaining, fast-paced and exciting.
In Russia, Injustice: Gods Among Us. Ultimate Edition comes with excellent sound system with Russian subtitles, which will allow users who do not speak English, understand all the nuances of the storyline and enjoy the original sound system game.

Become one of the most powerful men in the universe and take part in the grand battles in the online arena. Destroy the objects around you or turn them into powerful weapons, using their superpowers.
Fight on multi-level arenas, break through the walls of the bodies of the enemies, throwing them from the roofs of high-rise buildings - to win all good!
In the battle for life and death will meet heroes and villains universes DC Comics - Batman, Flash, Harley Quinn, Solomon Grundy, Superman, Wonder Woman and many others.
Each character has supernatural abilities, superb unique and individual ways of interaction with the game world.
The plot of Injustice: Gods Among Us tells a new story of the universe DC Comics. Script writers - experts NetherRealm Studios, as well as employees of DC Entertainment, Justin Gray (Justin Gray) and Jimmy Palmiotti (Jimmy Palmiotti). Fanciers of comics await famous places - such as the secret cave of Batman and Superman impregnable fortress.

<Delivery> This product is distributed through the digital distribution, represents the only pin and does not contain any packages and boxes. </ Delivery>

The easiest option to take a friends license disk with the game or download any torrent tracker license an image, set the game to him, and when prompted enter the code purchased from us the key.

VNMANIE After activation serial key in the steam, the key becomes not valid, ie, they can not re-use.
Be sure to remember, and better write down all the details of your account! Without them, you will not be able to gain access to active games in the future.