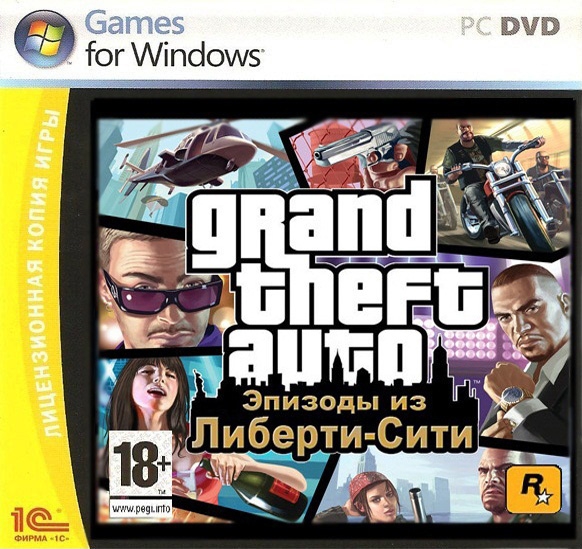 After payment you will immediately receive a license key with the disc Grand Theft Auto IV Episodes from Liberty City publisher 1C to activate the game among the Games for Windows LIVE, and the inclusion of all network functions of the game.

KEY NOT FOR STEAM, FOR A LIVE!

To install the game Grand Theft Auto IV Episodes from Liberty City you need the original CD, image or work with NODVD repak with LIVE !!!
If you do not know where to get a license, consult the seller for reference.

Caution Games for Windows LIVE is not Steam, where activating the key you can download the game. Live only key to activate the game already installed in the environment of Games for Windows LIVE, network-enabled games and Achievements. Ie You have to find and install the game from a disc or downloaded from any source and then aktvirovat it in our Live key. We take no responsibility if you can not, do not know how to create a working account LIVE.

If you do not know where, what and why to enter the key, and even more so can not imagine what the service Games for Windows LIVE, please do not buy the KEY in order to avoid any kind of misunderstandings. Keys exchange and are non-refundable!

History of Liberty City continues. Additions to the sensational criminal fighters GTA IV immerse users into the darkness of the street fights and glamorous atmosphere of nightclubs.

The Lost and Damned
Biker Johnny Klebits, experienced wolves urban jungle, embroiled in a ruthless war criminal networks for the redistribution of spheres of influence. Grouping of Lost (The Lost) will be difficult to survive in the meat grinder.

The Ballad of Gay Tony
Luis Lopez, loyal assistant Tony Prince - the movers and shakers of club business, also known as Gay Tony. His task - to survive in the vicious world of glamor. Who is friend and who is foe? Who is faithful to the end, and who at the first opportunity to thrust a knife in the back? These are the questions to be answered to the player.

Stories of two additions intersect with the script of the original Grand Theft Auto IV, so that the player is not only becoming a party of new clashes, but also an opportunity to look at a different angle on the familiar events.
Features
»New impressions of Grand Theft Auto IV. With two additions, previously available only to Xbox Live, you will discover new facets of this great game - the cruelty of streets and mock glamor club life.
"A single plot. Stories Niko Bellic from the original game, as well as Johnny Klebitsa and Luis Lopez of the new episodes are unique and at the same time connected with each other. Just before the end of his way each character, you get a full picture of the enormous network of intrigues, enveloped in Liberty City.
"Additional transport. Each episode adds to fleet game. At your disposal will be the new motorcycles, luxury cars, and even special equipment, including helicopter gunships and armored personnel carriers. And do not forget about the long-awaited jump with a parachute!
»Advanced arsenal. The new edge, a grenade launcher, advanced sniper rifle, bomb-Velcro - these and other kinds of weapons will add to your arsenal as a single, and in the collective game.
"Collective battle. The Lost and Damned and The Ballad of Gay Tony added in GTA IV new kinds of collective game.
"Music and TV! New TV shows and songs on the radio diversify your leisure time in Liberty City.


Seller will never be to ask you to send a purchased key for confirmation, identification, receipt of gifts
etc. If you receive this letter, know that it is working crooks. Be very careful