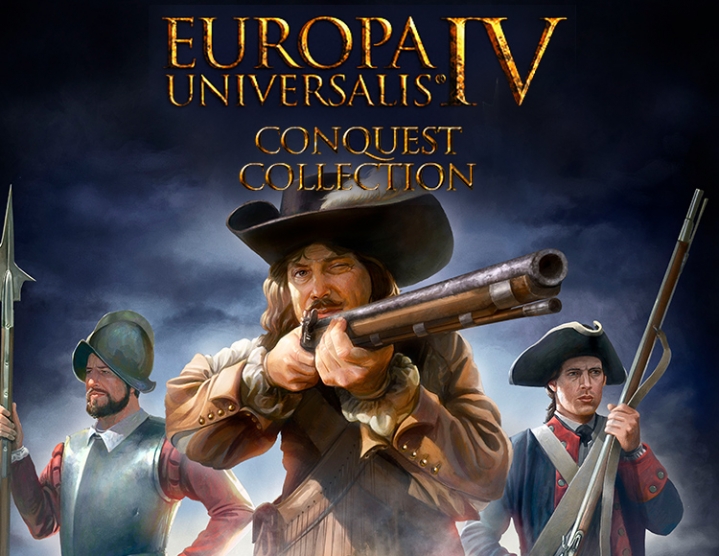 Set yourself on a journey through the historical events of the world. Alter the history and form it after your choosing.With the Conquest Collection Paradox Interactive brings you all the "Manpower" and "Prestige" you need to have the ultimate Europa Universalis IV experience.Paradox Development Studio delivers the fourth installment of the game that defined the Grand Strategy Genre. Europa Universalis IV gives you control of a nation to guide through the years in order to create a dominant global empire. Rule your nation through the centuries, with unparalleled freedom, depth and historical accuracy.True exploration, trade, warfare and diplomacy will be brought to life in this epic title rife with rich strategic and tactical depth.The Conquest Collection brings you seventeen additional DLC including the expansion pack Conquest of Paradise.Included in the collection: Europa Universalis IV
100 Years War Unit Pack
Horsemen and the Crescent Unit Pack
Winged Hussars Unit Pack
Stars and the Crescent
American Dream
Purple Phoenix
National Monuments
National Monuments II
Conquest of Constantinople
Conquest of Paradise
Conquistadors Unit Pack
Native Americans Unit Pack
Native Americans Unit Pack II
Songs of the New World
Songs of Yuletide
Colonial British and French Unit Pack
Muslim Advisor Portraits"
Main Game Features: Make your own decisions: Nation building is flexible. Decide your own form of government, the structure of your society, trade politics and more. The possibilities are endless
Use your Monarch Power: Experience the new system of monarch power where your choices are influenced by the caliber of the man you have at the top. Do you have a warrior King? Then it is time to make war
Experience history come to life: The great people and personalities of the past are on hand to support you. Thousands of historical events guide you, creating a unique atmosphere depending on the country you play
The world is now your playground: Players can enjoy over 300 years of gameplay with a lush topographic map in full 3D. Lead any one of more than 250 countries that originally existed during the game’s extensive time span
Experience the all new trade system: The trade system adds a new dimension to the great trade empires of the period. Seize control of key ports to expand your trade, support it with your powerful fleet and the wealth of the world will flow to you
Bring out your diplomatic skills: Deeper diplomatic gameplay with coalitions, threats, fleet basing rights and detailed support for rebels. Featuring a new unilateral opinion system that, for example, allows a country to dislike you while you remain neutral towards them
Engage in Multiplayer: Battle against your friends or try the co-operative multiplayer mode that allows several players to work together to control a single nation with up to 32 players. Featuring hotjoin, improved chat, new matchmaking servers and support for a standalone servers
Create your own history & customize your game: Europa Universalis IV gives you the chance to customize and mod practically anything your heart may desire