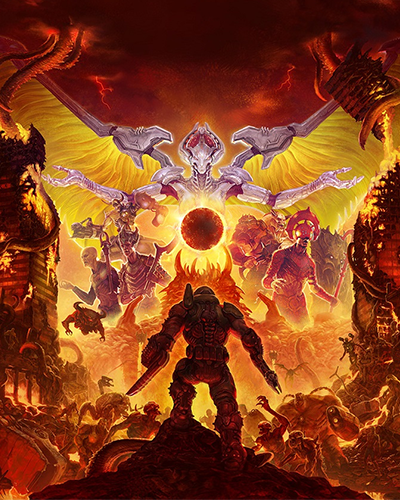 Immediately after payment and at a discount you will receive a license activation key for the game Doom Eternal Deluxe Edition.

• A new look for the Battlemode mode: the same revenant-dude
• Master level "Base of sectarians" - A revised version of a familiar level with new tests and surprises
• “Nostalgic” type of shotgun - Such a familiar shotgun from the original DOOM with a wooden butt. It’s especially nice to shoot at the hordes of demons in DOOM Eternal!

A new beginning was laid in 2016. Old hero, new performance, decalitres of blood and tons of fresh demonic meat. Dumgai returned, but failed to stop the future. Demons nevertheless broke into the world of people.

DOOM Eternal is a direct continuation of DOOM (2016). The new game raises the bar of the series. You have to break through the dimensions through battle, destroy everything in its path with incredible strength and speed. DOOM Eternal is a new generation project that sets a new standard for first-person shooter games.

The graphic side of the game has undergone a number of changes. DOOM Eternal was created on the id Tech 7 engine, which guarantees an incredible level of detail and elaboration of the environment, as well as excellent performance on various machines. DOOM Eternal is accompanied by an explosive soundtrack from the composer of the previous part, Mick Gordon.

In the game, the arsenal of deadly weapons was replenished, and the main character appeared with a mini-turret and blades built into his hands, which will turn enemies into mincemeat in a matter of seconds. Grab your weapons and set off to smash the new and familiar demons to the worlds of DOOM Eternal. You are the Executioner of Doom. The war continues. Crush the hellish creatures and complete your mission.