Do the deniers are right religion? Andrew Belomorsky 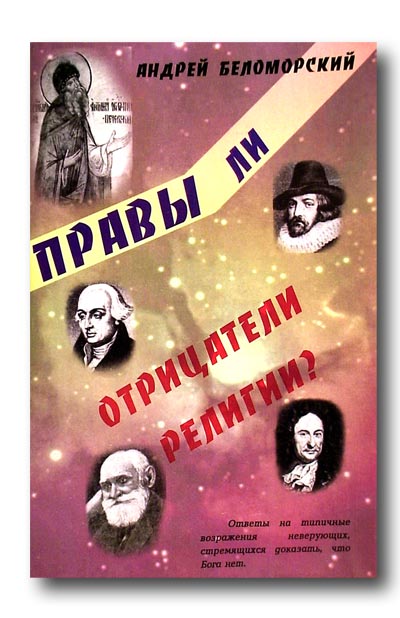 A person who has studied deeply the Christian faith, and if moving away from him, the more often it happens because of base motives, due to the fact that it is unprofitable or difficult to fulfill its requirements. But people who know the doctrine of his Church only superficially, often become victims of anti-religious propaganda, which, despite all its references to scientific achievements and conclusions, nothing to do with science is not.

The purpose of this brochure - to disassemble some of the most common objections, which often operate without God, to show their carelessness and failure.

"There is no God, as it is proved by science"

"There is no God, because the world develops according to immutable laws of nature and does not need any creator or guardians"


"There is no God, because none of the people did not see him, and scientists who have studied the universe, did not find it"

"There is no God, because science has proven the material development of the world. In the past, when it could not prove relied on God to explain the strange phenomenon"

"In the world there is nothing that would indicate the existence of God, therefore it does not exist"

"Belief in God is based on ignorance: educated, learned people do not believe in His existence"

"Religion - the enemy of science. The representatives of religion, especially the Catholic Church, has always pursued the science - they burned Giordano Bruno, Galileo and Copernicus persecuted because they defended the scientific truth of rotation of the Earth around the Sun."


"Religion tells of various miracles. But science has proven that there are no miracles, and can not be, as this would violate the laws of nature"


"According to the teaching of religion, man is composed of soul, spirit and body, the modern science of human well-studied and found no soul in it. Nowadays, we all know that death is a result of the termination of the important organs of the human body, and not because that the soul leaves the body. Scientists have even managed to "revive" the people, ie, to restore the cease of their activities, so that, if the soul existed, it would mean that they were able to get it back into the body "

"If the world was created by an omnipotent, wise and good God, then he would be more perfect. It could not be then so much suffering and injustice. God would take care of that, so everyone has all that it needs "

"Religion is a product of social relations, and therefore can not be true"

Related to item "Do the deniers are right religion? Andrew Belomorsky":

PLAYSTATION PLUS (PSN PLUS) RU 365 days

✅Trine 4 The Nightmare Prince Xbox one 🔑