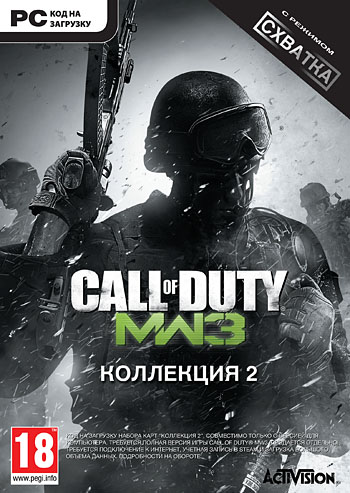 This set of add-ons includes three cards for multiplayer games, two cards for the new "Scramble" mode with the possibility of one-on-one or two-on-two battles, as well as two special operations cards.

Getaway: The first map of the unique "Scramble" mode. What used to be a tropical beach resort with exotic aquariums and huge pools has become the best place to test your desperate shooting skills while running.
Lookout: the second map for the "Struggle" will take you to the highlands, badly battered during the war. Both sides will clash in battle for convenient advanced positions in narrow corridors.
Sanctuary: over the past centuries, monasteries in central Greece have seen many wars, but now they have to survive your landing. Test your skills, and at the same time the strength of the monastic buildings, using the arsenal of machine guns, assault rifles and shotguns. But remember: it’s better not to look down.
Foundation: in the very heart of South Korea, in a closed building materials factory, concrete flows and shots sound. The plant has become an ideal battlefield for snipers and shooting enthusiasts on the run. Do not yawn at the sight of a huge concrete mixer in the center of the building if you do not want your rating to turn into construction dust.
Oasis: once the Oasis Hotel was a picturesque corner for all lovers of relaxation. Now it has become a paradise for fans of multiplayer battles. The ancient fortress will offer many options for settling bills.
“Switch”: equipped with an electromagnetic pulse, your team of snipers must neutralize the Russian aircraft carrier on the map for special operations mode. Only a bird´s-eye view will allow fighters to work together while you board a ship from under water.
"Battleship": while one fighter controls the Abrams tank, the other provides him with cover. Sweep on beaches and take refuge in the wreckage of an airplane to escape from Hamburg in a completely new map for special operations mode.

To install the game you need:
1. Download, install and run Steam: http://steampowered.com/download/SteamInstall.msi
2. Register a Steam account.
3. Open the "My Games" tab from the top menu, click the "Activate via Steam ..." button below
4. You will be asked to enter the product code, enter the key you purchased from us.