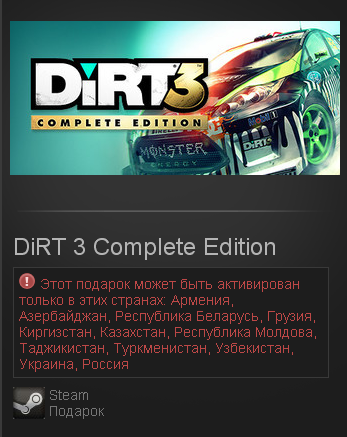 Uploaded: 20.03.2016
Content: text 92 symbols
Loyalty discount! If the total amount of your purchases from the seller grisial more than:
If you want to know your discount rate, please provide your email:

grisial information about the seller and his items
offlineAsk a question

**************************************************
DiRT 3 - race car simulator from Codemasters Studios. Colin McRae: DiRT 3 will boast more than five dozen vehicles of different years covering the fifty last years of motorsport. The game will be attended by well-known models of yesteryear and the present day. In DiRT 3 is more cars, territories, routes and events than in previous games. More than five dozen of the best rally cars participating in the race for the last fifty years; twice as many tracks than in the draft 2009; competitions for all tastes; ratings, awards and achievements - in DiRT 3, anyone can become a true professional virtual rally and make a brilliant racing career.