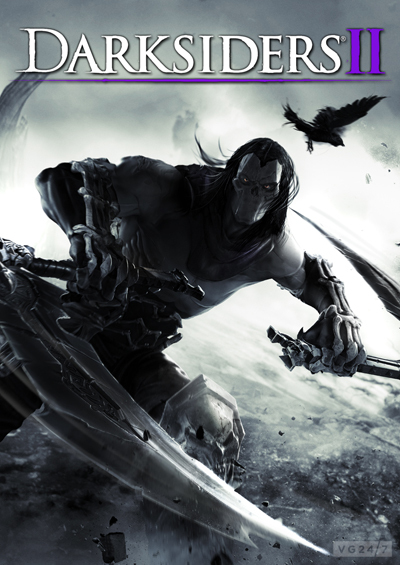 Uploaded: 14.03.2014
Content: Darksiders 2_011 (9).txt 0,08 kB
Loyalty discount! If the total amount of your purchases from the seller Nickcd more than:
If you want to know your discount rate, please provide your email:

Instant delivery! Code activation key to the game Darksiders 2 is displayed in the browser immediately after ordering!

Darksiders 2 II - continued action Darksiders: Wrath of War from the studio Vigil Games, the effect of which will be developed simultaneously with the events of the first part.
The protagonist of Darksiders II 2 is one of the horsemen of the Apocalypse, Death, War who tries to help find the culprit in the premature end of the world. Players will be able to explore new locations, to seek the secret rooms and solve puzzles and fight new monsters and different bosses, using a variety of skills and abilities.

The worst of the legendary horsemen of the Apocalypse awoke - Death goes on a journey to restore mankind, and clear the name of his brother War (the hero of the first game, Darksiders).
After the war he was convicted and sent back to Earth Charred Council, the Council has informed the rest of the three horsemen of his fate. Horseman Death, knowing that his brother - the most honest and incorruptible of the four, and would never have started the Apocalypse early, flies into a rage.
Realizing that the war was a victim of a conspiracy, death defying the ban of the Council and sent to the Lower Kingdom, a place between heaven and hell, to speak to powerful creatures ruling there.

Features Darksiders 2:
• Non-stop carnage - Death knows his business.
• The Art of War - an incredible arsenal of the protagonist to help you in any battle.
• The epic story - angels and demons will surround you everywhere.
• Horse fighting - trusty steed is always there.

Obratine note:
• Key Darksiders 2 has previously regional restrictions, and is activated only in Russia, the CIS countries!

Activation Key Darksiders 2:
1. You need to download and install Steam http://steampowered.com/download/SteamInstall.msi (if not already installed)
2. Register novvy Steam account or log into an existing.
3. Go to the "My Games" and select "Activate via Steam ...", read and agree to the Steam Subscriber Agreement and enter the key received immediately after the payment.
4. After activating the game Darksiders 2 appear in the list of games and you can download it from steam. The installation process (download) takes about 15-50 minutes (depending on your internet channel).

You can also pay attention to other games in this series:
Darksiders: Wrath of War - https://plati.market/asp/pay.asp?id_d=1015835