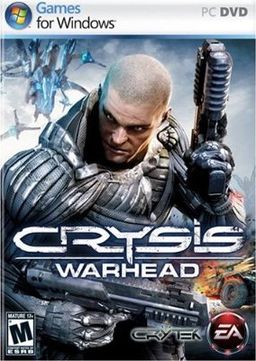 Tragic events in the cursed island is not finished with the final Crysis. Continued Crysis Warhead returns players to the battlefields of frosted and offers a look at familiar events through the eyes of another character. In the title role - associate Nomad Sergeant Sykes, nicknamed Psycho. The first part of the fantastic saga, he quickly disappeared from sight, going to another part of the island. Now you know what is happening on the other side of the rainforest.

The balance of power remains the same. Korean and American troops fighting for the right to possess a mysterious "meteorite" that proved to foreign spacecraft. Its owners do not care about human strife - the aliens are going to change the climate of the planet so that it is comfortable to them. Freezing area they begin with the ill-fated island where fierce fighting erupted between the Korean Army, US Special Forces and representatives of an alien civilization.

Features:
* Free rein. Crysis Warhead does not limit the hero - most of the battles taking place in the open countryside, littered with various buildings. You decide how to approach the enemy and engage in battle at all - nobody prevents bypass block-post side.
* Unique suit. Sykes was put in a fantastic Nanosuit, which may accelerate a fighter, he added force to make invisible or protected from bullets. Depending on the situation it is necessary to use different properties of the suit, with acceleration and additional forces are now used more often than in the original game.
* Advanced arsenal. Justifying its nickname, Psycho gained access to new, more devastating weapons. In its order, inter alia, have a grenade launcher, automatic pistols and antitank mines.
* Roads are not needed. Fleet added a new SUV and other vehicles.
* Optimization of the mark. After considerable technological upgrading schedule games remained the highest level, but the system requirements on the order fell!

The original copy of the key, the license agreement and all copies of the software in its original packaging, you can get a convenient way for you. To do this, after payment and receiving a digital copy of the key, please contact us by email or Skype. For residents of Moscow and the Moscow region delivery can be carried out by courier. Postage and packing, as well as courier services are paid separately by you.

!!! Activation does not work through EADM !!!
It is necessary to download the distribution license from any torrent tracker or
the easiest option to take a friends license disk with the game or download any torrent tracker license an image, set the game to him, and when prompted enter the code purchased from us the key.

If you have any problems with the activation of the key, you can directly contact the support of the EA - http://support.electronicarts.ru/

Dear customer, in order to avoid lock key and your accounts are purchased KEYS bought from an official supplier.
BEWARE OF CHEAP suspicious code as They can be purchased by legal means NOT AND CAUSE bananas.

We take full responsibility for the products sold by us and give 100% guarantee of purity of the code and that the code has not been previously activated somewhere.