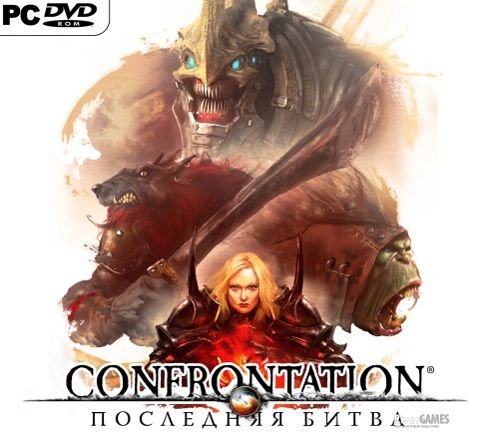 Uploaded: 05.04.2012
Content: 005.JPG 126,64 kB
Loyalty discount! If the total amount of your purchases from the seller Nickcd more than:
If you want to know your discount rate, please provide your email:

Instant delivery! Activation Key Code on the game Confrontation: The Last Stand is displayed in the browser immediately after ordering!

Confrontation: The Last Stand - role-playing game in the fantasy universe created exclusively for the PC based on the famous board wargame from the company Rackham.

The game Confrontation you have to go back to war-torn universe Aarklash to lead a campaign against the brave soldiers Griffin violent followers of Scorpio and destroy these power-mad creatures in a last decisive battle. However, these monsters are not the only your enemies. On the way into the den of scorpions you come up with no less horrific enemies - rampant bloodthirsty Wolf and powerful evil orcs.

Features Confrontation: The Last Stand:
• Confrontation in your choice of 12 units with unique characteristics - shape of their squad, the most effective, depending on the purpose of the assignment and foes, who will have to confront.
• Passing an exciting story campaign, you will spend in Aarklash 20, or even 30 unforgettable hours with his head immersed in a magnetic atmosphere of this brutal, but in its own beautiful universe.
• Build your own strategiyuv Confrontation, use and benefit from any weakness of the opponent. What do you like - go ahead and operate covertly? Active pause mode allows to orient in a situation and choose the most effective tactics.
• Get commander talent in multiplayer battles, leading the troops of one of the four sides: griffins, scorpions, Wolf or orcs.

Advantages of the project Confrontation:
For the first time fans of the board game Confrontation will lead a bloody battle in the virtual space and observe the results of their actions on the screen. But for those who have not been in Aarklash, «Confrontation: The Last Stand" - a good excuse to get acquainted with this original universe.

In «Confrontation: The Last Stand" players get the best opportunities for the creation, configuration and character development as well as for the processing of their equipment. Everyone can create a truly unique soldiers - in the fields of multiplayer battles not find two identical characters.

In «Confrontation: The Last Stand" implemented a comprehensive multiplayer mode: Battle held at the general to the whole world, "arena", the results of each owner of the game displayed in the global league table, which certainly heighten the excitement of participating online battles.

Obratine note:
• Confrontation: The Last Stand - has territorial restrictions (suitable only for Russia and CIS countries)!

Activation key Confrontation: The Last Stand:
1. You need to download and install Steam http://steampowered.com/download/SteamInstall.msi (if not already installed)
2. Register novvy Steam account or log into an existing.
3. Go to the "My Games" and select "Activate via Steam ...", read and agree to the Steam Subscriber Agreement and enter the key received immediately after the payment.
4. After activating the game Confrontation: The Last Stand appear in the list of games and you can download it from steam. The installation process (download) takes about 15-50 minutes (depending on your internet channel).

\u003cdelivery\u003e The original copy of the key Confrontation: The Last Stand, the license agreement and all copies of the software in its original packaging, you can get a convenient way for you. To do this, after payment and receiving a digital copy of the key, please contact us by email or phone. Postage and packing, as well as courier services are paid separately by you. \u003c/delivery \u003e