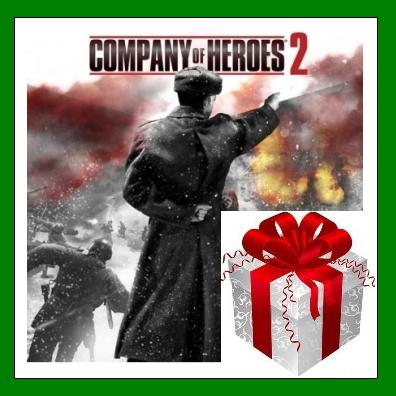 After payment you will instantly get Steam Gift Company of Heroes 2.


The game has no territorial restrictions - REGION FREE and is suitable for activation in any country.


The game has no territorial restrictions - REGION FREE and is suitable for activation in any country.


In addition, we are launching a campaign for our loyal customers. For every 5 purchases any goods made by the sellerMediaSoft, starting from December 1, 2011 the buyer gets to choose one of the games from the STEAM company "New Disc" and "1C": RaceOn, Lost Planet Extreme Condition, Prey, Scourge Project, Shatter. Cooperate, buy friends and get your prize !!! The main condition - for all purchases you have to post reviews.


For any questions related to the conduct of the action, contact the seller. The action was not involved resellers have a personal discount of 5% or more. The number of keys is limited, the seller reserves the right at the end of promotional key to stop the action.


In the darkest hour in world history you will become red and commander in fierce battles to defend the Soviet homeland from the Nazi invaders.


1941. The beginning of the bloody conflict of World War II, which killed more than 14 million soldiers and officers.


With the Red Army, you will go from almost total defeat to triumph over Germany, taking part in the toughest battles of the Eastern Front.


You have to make tactical decisions that can change the course of the war itself. Expand your leadership talent and strengthen the power of the Soviet Union, to fight breaking to Berlin.


Next, for the motherland!

Instructions on how to activate Company of Heroes 2:

2. Log in to your account in the system and activate https://store.steampowered.com/login/ gift-link after payment received in your browser (copy and paste into your browser). Then you can either add the game to your library, or to keep the inventory.


VNMANIE: After activating the gift-reference to the incentive it becomes not valid, ie, again it can be used.

BEWARE OF CHEAP suspicious code as They can be purchased ILLEGAL BY AND CAUSE bananas.


We take full responsibility for the goods sold by us and give 100% guarantee of purity of code and that code has not been previously activated somewhere.